Standing with the Oddballs 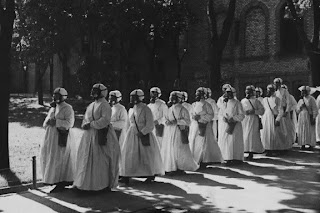 In a typically well-written post today on Inside Catholic, John Zmirak takes on the notion of beauty in Catholic worship and the order of things. In that post, the following excerpt about growing up as an against-the-current traditional Catholic struck me as particularly insightful. It could describe the situation of the traditional Catholic still today, even three years after Summorum Pontificum-- and I know from friends that it nails what the situation was like for them years ago:

There are worse ways to spend one's twenties. I could have been living out in the suburbs at a parish built or wreckovated in the 1970s, yawning on a padded, snot-green pew, as "Gather Us In" was strummed incompetently on a guitar. You know the kind of church I mean -- where banality and comfort set the tone, where the stark strangeness of the divine and human sacrifice that is the Mass are swathed and obscured in a mauve haze of cozy emotional uplift, to the point where kneeling before the Host seems a crude and archaic gesture. Beauty at such a place would seem . . . out of place, like a laurelled Olympic athlete in a Grecian tunic stranded at an overweight biker's bar. Just so, a studied mediocrity of music, preaching, and artwork has come to prevail in modern churches. The sanctuary, once the site where the Holy of Holies was honored as best the impoverished congregation could sacrifice to afford, becomes instead God's refrigerator, where all our slapdash art projects are pinned by plastic magnets. A doting, senile grandma, God loves us just as we are, so our half-baked efforts are plenty. As I've found myself muttering on the way out of such places, "Nothing's too crappy for God."

Given the alternative, I'm proud to stand with the oddballs. I'm glad I was one of those weird enough to insist -- in the face of all apparent evidence -- that the Church's historic liturgy wasn't dead, that it would someday be revived and embraced throughout the Church around the world. Wherever that fugitive, exquisitely un-modern creature poked up her head, we hunted her -- in crumbling Armenian chapels filled with puzzled Ecuadorians, in abandoned Italian parishes kept alive only to conduct Mafia funerals, in mental hospital chapels where the bishop consigned us "crackpots," or forgotten graveyard chapels where we tried (it seemed) to raise the dead. We chased her down the nights and down the days, we chased her down the arches of the years; we chased her through the labyrinthine ways of canon law, and pastoral provisions. And at last, by the grace of Pope Benedict XVI, who chivalrously conducted the holy lady out of hiding, we welcomed her, still-blinking, back into the light.
Posted by thetimman at 2:29 PM