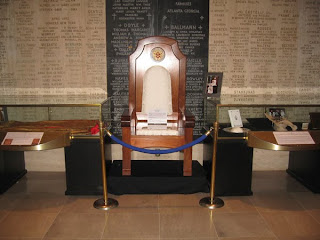 No, by the title of this post I am not referring to the lawsuit between the Archdiocese of Saint Louis and the St. Stanislaus Kostka Corporation. Not this time, anyway. Instead, it refers to a lawsuit filed by a former postulant of the canonically irregular Holy Family Monastery against that group and its two leaders, the Frederick and Robert Dimond.

The Dimonds are (in)famous as two of the more well-known adherents of the sedevacantist position about the state of the papacy in the Church today. In case you aren't familiar with the term, sedevacantists believe that the chair (the "sede" part) of Peter is vacant (the "vacantist" part). In other words, there is currently either no Pope or else there is one but his identity is not generally well-known.

Some sedevacantists believe that there is no Pope because the sitting Pope held or taught manifest heresy and thus deposed himself (this has been claimed by some to apply to all of the Popes from John XXIII onwards). Some believe that the late Giuseppe Cardinal Siri was elected Pope instead of John XXIII and/or before Paul VI, but was made to abdicate or appear to abdicate. Because the "real" Pope Siri lived on for quite awhile, the Cardinals named by the post-Vatican II Popes aren't really Cardinals, and hence there may not have been valid subsequent conclaves. Finally, other sedevacantists take the position that the new rite of ordination for Bishops is not valid and/or the new rite of ordination for priests is not valid. Thus, only those Bishops made before the rite was changed are really Bishops. Only those priests ordained by old-rite-consecrated Bishops are really priests, etc. Under this theory, the current Pope is really only Father Ratzinger.

If you are thinking that holding such a position casts grave doubts on the indefectibility of the Church and the promise of Christ that the gates of hell would not prevail, then I say you are right. However, there are people who hold this position, and point to the writings of St. Robert Bellarmine and others to back them up.

The Dimond brothers are two such people, and they run the allegedly "traditionalist" Most Holy Family Monastery. How one can be a traditionalist and take the sedevacantist position is one of the conundra of their position. But I digress.

Apparently, a fairly wealthy man who wanted to become a Benedictine monk and who donated his fortune of about $1.6 million to the monastery in question now wants his money back. He claims he never could have become a Benedictine monk via this order, and thus his money was taken by fraud. The Dimond brothers are responding with a defamation counterclaim asking for $5 million.

The former postulant's lawyer sums up the case as being all about whether these brothers are, or are not, Benedictines. And now this is turned over to a state secular judge for a determination. This strikes me as somewhat ironic, and has the potential to set a bad precedent. The plaintiff wants a judge to decide who is and is not a member of a Catholic religious order, and the defendants want to claim a first amendment right for anyone to call themselves a member of a Catholic religious order. Sounds tricky.

From the full story:

When Eric E. Hoyle entered a monastery in Allegany County in 2005 expecting to become a Benedictine monk, he turned over just about everything he had to the monastery.

Operators of Most Holy Family Monastery in the rural Town of Fillmore accepted about $1.6 million from the former Maryland schoolteacher, who was 25 years old at the time.

But a disenchanted Hoyle ended up leaving the monastery after a couple of years, and soon after, he sued in federal court to get the money back.

The messy legal case has the potential to become a battle over religious freedom.

The former teacher is charging that the monastery and its two primary representatives, Frederick and Robert Dimond, simply defrauded him out of his fortune.

Hoyle claims the Dimonds lied about how the monastery was operated and about the religious principles to which they adhered.

Hoyle learned only after transferring his wealth that the monastery wasn't part of the ancient Catholic Order of St. Benedict, which meant that he could not become a true Benedictine monk there, according to the lawsuit filed in U.S. District Court, Western District of New York.

"The issue is whether or not these guys are really Benedictine monks," K. Wade Eaton, Hoyle's lawyer, said in an interview.

Eaton declined to comment further, but in court papers, he also alleges that the Dimonds are running a racketeering scheme to defraud the public through their Web site, mailings and publications.

Charles Ritter, a lawyer for the Dimonds, said Hoyle was hardly duped into joining the monastery or making the gift.

"It's not like they went and found him. He went out and found them," Ritter said. "They didn't tell him he had to give them everything. It was a decision he made ... He knew what he was doing. He was not misled. He was very well read and up to speed on what their beliefs were."

The Dimonds additionally maintain that the courts and government have no say in determining who exactly is a Benedictine monk.

"It's a First Amendment right that we can profess to be Benedictines, and we believe we are," says Robert Dimond, in an audio recording on the monastery's Web site. "The state can't determine that, the government can't determine that. It can't rule on who is or who is not a Benedictine, just like it can't determine what is a true church or define what a church is, OK. It doesn't get entangled in those religious disputes."

Robert Dimond says that Hoyle was aware of the monastery's positions on the Catholic Church, which it regards as having gone awry since the Second Vatican Council.

Hoyle's claim that he was deceived is "the height of absurdity," Robert Dimond says in the audiotape.

The Dimonds use the initials "O.S.B." after their names, apparently to identify themselves as part of the Order of St. Benedict, a worldwide Catholic order of monks established by a sixth century saint.

[...]
Its Web site spells out positions on any number of topics. The group considers Pope Benedict XVI an anti-pope and claims that the pontiff is as "pro-abortion" as some of the United States most liberal lawmakers. The Dimonds even consider other schismatic traditionalist groups, such as the Society of St. Pius X (SLC Note: the article is not correct in naming the SSPX as schismatic; the Vatican has stated it is not), as being heretical because their views on who can achieve salvation aren't conservative enough.

[...]
Hoyle, who formerly taught high school chemistry, made his first donation, a check for $700, to Most Holy Family Monastery in 2005. That was followed a month later by another check, this time for $65,000.

Following two visits to the monastery, Hoyle asked to undergo training as a postulant and Frederick Dimond agreed, provided that Hoyle turn over his worldly possessions, according to court papers.

In November of 2005, Hoyle transferred more than a million shares of Guinor Gold Corp., then valued at $1.2 million, to the monastery. He turned over an additional $307,989 in brokerage account assets nearly a year later.
Posted by thetimman at 3:48 PM

Interesting. The Benedictines are not structured like other religious orders. They do not have the "top down" hierarchy with a head honcho in Rome and a constitution and clear rules on who is a member and who is not. Rather, they are very decentralized. The defendants may have a point. It seems that any group that follows the "Rule of St. Benedict" can call themselves Benedictines.

I hate to say it but I think the Dimonds are right on this one. On the other hand...why don't they just give the money back that he gave them and call it good? Wouldn't it be better for them to just make peace with this former member and give him his money back, then to counter-sue him? That would definitely show more good will on their part. It seems to me that they just don't want to give him back his money.

The anons above have it right I think. There are Anglican Benedictines. Anyone who follows the rule of St. Benedict can often be recognized as a Benedictine Monk by other monks of various denominations.

It would seem that the former postulate should get a declaration from the bishop where this 'monastery' is located as to whether this group of 'monks' are in communion with the Roman Catholic Church--or even obtain such a declaration from the Vatican. The courts should accept that as a given and not a point to be debated under civil law. Then go to legal case of misrepresentation to get his money back.

The Dimond brothers make VERY clear on their website, what their group believes. They are obviously "on the fringe" and proclaim their status as such. The person who is suing to get his money back might have a hard time proving that "fraud" was involved. Their views are considered nutty by many but the views are right there for everyone to see.
Of course, it doesn't say if there were any possible shenanigans going on with all of the money that had nothing to do with promoting their "Order".
It will be an interesting case.

According to The Holy Family Monastery's website the Church led by Benedict XVI is a "sect." Is there no one else who doesn't find in this a species of dark humor?

Well, St. Stan's is a sect and St. Cronan's may be a sect and the Old Catholics of Utrecht are definitely a sect. All this bare and blantant sect-u-ality inspires me to tell a joke which is going around about a crank call which actually got to the private phone of the Pope some time ago. Really, I'm not making this up. Some say it really happened.

(His Holiness Benedict XVI is at his desk when the phone rings.)

VOICE: My son, this is THE LORD.

B.XVI: (drops to his knees holding phone) Oh, My LORD How wonderful of you to call. We have so many problems. And I need your help so much.

VOICE: Be not afraid. I am going to solve all your problems.

VOICE: Quiet my son. Did I not tell you I will solve all your problems.

B.XVI: Didn't mean to doubt you...just wanted to give you a run down on some stuff....

VOICE: My son "I am with you at all times." I am about to return and solve all your problems.

VOICE: Well, first the good news, then the bad.


B.XVI: Give me the good news. I really need good news.

VOICE: I am going to declare for all time "The One True Church"

(His Holiness pauses to think.)

MORAL: Anybody can call anybody a sect. It's part of the dictatorship of relativism derided by His Holiness Benedict XVI, The Servant of the Servants of God.

Six comments, now seven, and not a single pun using the phrase "according to Hoyle"?

This comment box has seen it's better days, clearly.

Now, THAT'S funny MrGuy! I need to be careful, here.....I just might start to ENJOY your repartee!