Piling On "It's a Wonderful Life" 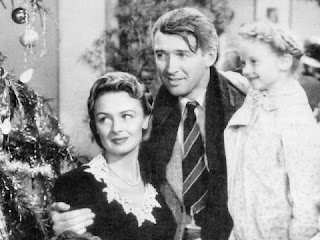 In my Christmas movie post of last week, I gave an oblique nudge at the ubiquitous Frank Capra classic, "It's a Wonderful Life". It was partly an inside joke, nodding towards reader X, who has taken the movie to task in the past for its infantilism of Christianity.

Well, I saw this article on the Mises Institute site about the economic flaws of this movie (and "Miracle on 34th Street"), and thought I would share the relevant excerpt. It bears noting that the Mises Institute is not a specifically pro- or anti- Christian organization, but focuses on free market economics. By ignoring the essential element of religion and faith, it of course falls short of providing a really accurate economic philosophy-- a shortfall shared by all economic and political theories which fail to account for the truth of the Catholic faith.

["It's a Wonderful] Life" is a more ambitious film, with an intricate plot stretching from 1919 to 1947. George Bailey has spent what he regards as an unfulfilled life in the town of Bedford Falls running a "Building & Loan" association founded by his late father. A good man, he is less interested in profits than in helping people buy decent housing. He makes loans on the basis of character rather than demonstrated creditworthiness, with no indication given of the default rate.

Bailey is hated by Henry Potter, an angry cripple who "owns half the town," one of whose ventures is renting badly maintained tenements to the poor. To Potter, Bailey is "not a businessman" because he has "high ideals, so-called" and he contemptuously asks Bailey if he is "running a business or a charity ward."

What is not explained--what is never explained about the vindictive tycoons of fiction--is where Potter gets his money. (In the depths of the Depression, he is waited on by liveried servants.) He can't have made a fortune renting a few hovels, and none of the properties he owns will bring in a penny unless they offer something people want. So, although he is shown doing nothing but pushing other people around, Potter must be providing a valuable service or selling something in great demand.

Potter gets his first chance to break Bailey during the 1933 run on the banks, when Bailey's panicky stockholders want their investments back. Potter has already saved (and acquired) the remaining independent banks of Bedford Falls by guaranteeing their loans in exchange for control, and he tempts Bailey's stockholders by offering to guarantee the loans owed to the association if they sell him their shares at half price. But Bailey foils Potter's plan to capture his company by tiding his stockholders over with small loans from his own pocket until the banks re-open.

Let's stop the music here to ask why Potter would tender his offer. Presumably, Potter was willing to take over the banks because he believed there was money to be made from owning them. If he wants Bailey's B&L, he must likewise believe it is profitable, and that the loans outstanding will be repaid. But why would he think this if, as he says, "Bailey has never made a dime?" Why would he buy something worthless for any fraction of its original price, or guarantee loans he thinks he will end up paying?

It is suggested that Potter is driven by pure spite, but if so, if he is willing to take a loss just to hurt Bailey, he is acting directly contrary to profit-maximization. Perhaps Potter hopes that buying out Bailey will give him a housing monopoly, allowing him to raise rents as much as he pleases. But he must also realize that he is powerless to prevent other upstart lenders from invading his market by offering comparable services at lower costs.

Closely related issues are raised by Bailey's most idealistic venture, a development of attractive private homes meant for the likes of Potter's tenants. Bailey shows his essential goodness by personally helping the humble Mr. Martini, his umpteen children, and even his goat move in. Potter, of course, is further infuriated--when he should be asking how Mr. Martini can afford his new digs, or, equivalently, how Bailey could afford to build them.

However carefully Bailey controls costs (no more carefully than Potter, one assumes), his nice houses must be more expensive to construct than tenements. If the interest on the Martini mortgage comes to no more than the rent for a Potter-built hovel, Bailey will lose money or make very little, his stockholders will pull out, and Bailey will be left bankrupt. If on the other hand Bailey does charge more than Potter but Martini can and is willing to pay it, why did Martini live in squalor for so long when he could have moved elsewhere or, indeed, taken out a mortgage on a new house? In other words, if Potter's slums are overpriced, Bailey has filled a market niche attractive to any entrepreneur, occupation of which does not require moralistic huffing and puffing.

Potter finally gets his chance to ruin Bailey when Bailey's drunken uncle, loyally retained as financial officer (don't Bailey's stockholders care about personnel policy?), unwittingly leaves $8,000 of the firm's money on Potter's wheelchair. Potter of course keeps it, and, with the money missing, Bailey faces imprisonment. He is about to kill himself when an "angel, 2nd class" intervenes, showing Bailey that his life has been well-spent because of the good he has done. Bailey embraces life anew, and, in the final scene, everyone he has helped over the years chips in to lend him the missing money. There is not a dry eye in the house.

It seems to have eluded the creators of Life that two key elements of this denouement work against the profit-is-dubious, altruism-is-good message. First Potter's knowingly keeping the $8,000 is not a market transaction, since the money is someone else's property not acquired in a voluntary exchange. Potter's malefaction is just the sort of behavior the market forbids, and if discovered would lead to criminal penalties.

Second is the matter of the angel, Clarence, commissioned by Higher Powers to save Bailey from suicide. Now, Clarence is a bit of a bumbler who has spent several centuries in Heaven without getting his wings, and he is told at the outset that he will get his wings if he saves Bailey.

Of course, Clarence does not undertake the mission for the purely self-interested purpose of advancing himself. He is as kind as angels should be, and really wants to help. But the fact is that he does not save Bailey as an act of pure goodness, and the audience is expected to rejoice when, as a result of his efforts, he rises in the celestial hierarchy. Even in Heaven it is recognized that useful services should be rewarded.
Posted by thetimman at 10:15 AM

Michael Levin’s reading of “It’s a Wonderful Life” is more unrealistic than the film he criticizes. Levin may be a philosopher but I doubt he has ever worked in banking, or real estate. “Life”, illustrates the practices of banking in 1933; moreover it vividly depicts the effects of a limited money supply on banking in those years preceding the institution of Fannie Mae and the secondary market.

Levin fails to grasp the situation of banks in 1933, when he criticizes Bailey for making “loans on the basis of character rather than demonstrated creditworthiness.” Levin should know that it ss doubtful that, before the creation of the secondary market, strict origination procedures such as credit checks, and income/expense ratios were observed in small banks.

Rather, what happened was that often, bankers made assessments of CHARACTER. George Bailey’s way of doing things was common. Rule of thumb questions were asked of applicants, and loans were granted. “Life” is historically accurate.

Levin complains, “although he (Potter) is shown doing nothing but pushing other people around, Potter must be providing a valuable service or selling something in great demand.” Indeed, Potter IS selling something in great demand: Money! There is not much of it around to loan and Potter has most of it. Again, in 1933, the money supply in small communities was primarily the local bank whose deposit base -- the source of loanable cash -- was usually nothing more than the DDA accounts of the bank’s creators: the bank president and the rich families making up the board. No doubt, Potter wants a monopoly of the money supply where he can exercise tight money policies and control the town. However, Levin fails to notice that Potter’s motive may not be purely economic. He may just want power and the ability to make the town in his own image. The town is called “Potterville” in Bailey’s dreamscape. "Life" is not purely an economic treatise, it is a work of art addressing other aspects of human nature.


Levin, finally, criticizes George Bailey for “tiding his stockholders over with small loans from his own pocket until the banks re-open.” That’s called a “cash call” or “capital call”, Mr. Levin. If you have ever been partner in any kind of LLC, or even owned part of a tavern, you know that in times of crisis the investors have to reach in their pockets and re-capitalize. In the case of a small bank, that means increasing the deposit base by putting in fresh money. Did you not notice, Mr. Levin, that this is exactly what George Bailey did with his “honeymoon” cash?

Levin is on his soundest ground when he grouses that the new houses built for the Mr. Martinis of the world may not work out. In that respect I agree with him. The Martini home does remind us of the under-prime fiasco.

Nonetheless, I must object to Levin’s making Clarence a free market liberal of the Adam Smith variety. It's an amusing trope in as much as it strips the old seraph of his wings and makes him no more than a celestial salesman. However, doing a “revisionist” reading of “Clarence” making Capra’s angel a bumbling hustler is a note so screechingly tone deaf to the sensibilities of the majority culture I can only conclude that Mr. Levin has spent too much time in the cafes and restaurants of New York, as I once did.

Reading your post, Timman, was like sitting next to the geek at the movies who constantly reminds you "that could never happen".

IT'S A SAPPY CHRISTMAS MOVIE!!!

Let me enjoy it.

That's just what Obama wants you to think.

And, there was a glaring typo in your post. When you typed "cool guy" it mistakenly spelled "geek".