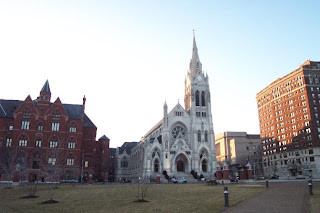 Cardinal Burke's words on the importance of Catholic colleges safeguarding their Catholic identity couldn't be more timely, although perhaps they didn't filter across the Mississippi River. SLU, the non-Catholic Catholic university in town, is up to its usual antics.

This time, "SLU students" have invited Todd Salzman, the Chairman of the theology department at Creighton University (a subject for an Omaha Catholic blog, should that exist), to speak at the 6th Annual Undergraduate Marriage and Dating Conference. I put quotation marks around "SLU students", because that is how it is described at the linked story, but I am sceptical that anyone could be a keynote speaker for any conference at the University without faculty or administration acquiescence.

Salzman's best known work, "The Sexual Person", has been censured by the USCCB as containing serious errors with regard to moral issues concerning human sexuality. So, it may come as no shock to you that the book was positively reviewed by a SLU professor. From the full article at STLToday:

In a review of the book for the National Catholic Reporter in January 2009, Julie Hanlon Rubio, an associate professor of Christian ethics at SLU, wrote that "The Sexual Person" was "among the most important works in Catholic sexual ethics to emerge in the last two decades," and that its authors 'stand firmly within the Catholic tradition even as they argue for significant changes." (Lawler and Salzman cite Rubio's own work in the book.)

Only a mainstream "Catholic" University professor could write something as inane as that someone could stand "firmly" within Catholic tradition while arguing for "significant changes". Do these people have any idea of the faith? But I digress.

The Archbishop of Omaha, and even the USCCB--ponder that for a moment-- took a different view:

But while Catholic theologians were enthusiastic about the work, the magesterium saw things differently. Even before the book's publication, the archbishop of Omaha had criticized articles by Lawler and Salzman saying they had argued for "the moral legitimacy of some homosexual acts," and that their theology was "in serious error" and "cannot be considered authentic Catholic teaching."

After "The Sexual Person" was published, the U.S. Conference of Catholic Bishops' committee on doctrine began examining the Creighton professors' conclusions.

In September, the committee of nine bishops issued a 24-page statement on the "Inadequacies in the Theological Methodology and Conclusions" of "The Sexual Person." The authors, it said, "reach erroneous conclusions on a whole range of issues, including the morality of pre-marital sex, contraception and artificial insemination."

The bishops concluded that the ideas in "The Sexual Person" were "clearly in contradiction to the authentic teaching of the Church, cannot provide a true norm for moral action and in fact are harmful to one's moral and spiritual life."

One might legitimately ask why a theologian so censured by the national conference of bishops is allowed to teach theology at a Catholic University, but this type of situation exists at so many Catholic colleges that one wonders why they are not all placed under interdict.

In a similar case a couple of years back, Cardinal Burke asked Aquinas School of Theology to disinvite another dissident theologian, Peter Phan, from speaking there. Aquinas complied.

In this case, according to the article:

In an interview this week, Salzman was asked if he was worried that he could be banned from campus by St. Louis Archbishop Robert Carlson. Salzman said he would "leave it in the hands of St. Louis University."

Salzman expressed concern that, since the event was student sponsored, the students themselves might be mixed up in the debate. At the same time, he said, "It's important for them to get various sides of a position, and I think there's no better place to discuss these controversial issues than within the Catholic university setting."

In a written statement to the Post-Dispatch, Carlson said only that he knew of the bishops' September document on "The Sexual Person."

"I am aware of that statement and support it," Carlson wrote.
I don't know what will happen, but it is safe to say that Fr. Biondi isn't going to self-police the Catholic identity of Saint Louis University. If this person is to give a keynote address on such an important topic for young Catholic students, it only adds more fuel to the increasingly common position that a Catholic parent would have to be crazy to entrust their children to SLU.
Posted by thetimman at 9:44 AM

What's the big surpise? Did not SLU go through a court battle not too long ago insisting it was not a Catholic university?

In fairness, I would prefer not to "entrust" my children's salvation to anyone, other than to God and the communion of saints in prayer.

Ideally, one would raise one's children with a base of knowledge about their faith and a respect for the magesterium so that they would be able to withstand such heretical teachings. 19-year olds aren't 9-year olds, after all.

That doesn't make SLU right for giving this "theologian" a pulpit; it is in fact very wrong.

But finances, the readiness of any particular college student ot live away from home, and a variety of other factors may still conspire to make SLU the least worst choice for parents to send their college age children.

What, Wash U would be better from a religious perspective? (I can make arguments that it would be, granted, but it's a delicate argument to make, and reasonable minds can certainly disagree.) Or maybe UMSL or Harris-Stowe?

Anyway, I think your points about SLU are well-made. Those about the mental states of parents who might reasonably believe that SLU is the best option for their college age child, not so much.

Don't forget, they also had a Glenn Beck love fest at their new arena. SLU lost its soul long ago.

What does an erroneous theologian speaking on Catholic doctrine in extreme error have to do with a political commentator, Glen Beck? Most Colleges have political speakers, although most are liberals.

Other Anonymous,
I know of several people who lost their way when they attended a "Catholic" university that offered falsehoods, influencing them more than what they had learned their whole childhood. So it risky to send your children to such a University, but the parent can judge if their child's personality will keep them safe from the influence of idiots.

I worry that Archbishop Carlson is too eager to prove himself "his own man" and will therefore be intentional about distancing himself from predictable "Burke-responses" to various issues. We can all well imagine, with gratitude, how His Eminence would have intervened in this SLU situation during the halycon days of his mandate. Is it reasonable to predict that Abp. Carlson will do just the opposite to establish his own style of leadership? Let's hope not ... but I have my suspicions. In the meantime, who could believe that even a group as audacious as the late-20th-early 21st century Jesuits can have the gall to leave a Catholic-lite (if Catholic at all) like Father Biondi in charge of their university in one of the most Catholic cities in the nation!

If you want to keep your 19-year-old children hermetically sealed from anything that might lead them astray at such a tender age, may I suggest continuing to homeschool them until they're 40?

If Archbishop Carlson sits by and does nothing, it will be very telling.

Up to a pint I can respect the new archbishop's desire to prove that he is his own man and not a clone of Cardinal Burke. The Problem is that just about everything that Cardinal Burke did when he was Archbishop of St. louis was right, so how do you pick ansd choose from right actions, policies, decisions in order to prove that you're your own man. Besides, the lower man should look up to his senior for good example and instruction. I think there's room for a little less testerone here and more attention to the truth!

1. It makes sense to me that at ANY university, Catholic or not, there must be some sort of policy that Faculty must be involved in student planning and activities. However, I think it is very rash of you to jump to conclusions and assume that the Theologins at SLU are somehow conspiring to take over a student run conference and as if their purpose is to brainwash the students...I think any student hopefully would actively be challenged by their faith and not just blindly follow a conservative upbringing.

2. Catholic universities are a chance for students to challenge what they know and expand their theological horizons. Good professors try to get their students to think critically and come to their own conclusions by critically evaluating all sides and arguments. I have no doubt that Todd Salzman is such a professor.

3.Although I appreciate parental influence and opinion in deciding where your child goes to school. Ultimately it is the responsibility of the student to decide on a school that will engage them as a whole person, as the Jesuits mission is. They create well rounded men and women for others.

That is the typical way that the products of the modern university system think about higher education. The point of all education is to discover and impart truth. If you doubt the existence of objective truth then the SLU indeed has done a job on-- I mean, for-- you. If you think that holding up error as the equal of truth (on matters of the natural moral law as in other matters) to be "chosen" by the personal preference of the the chooser is the task of the university, then we will disagree.

And in any event, it is a scandal for a University that (in SLU's case, sometimes, when it is convenient) calls itself Catholic to bring in speakers that directly contradict the infallible teaching of the Catholic Church.