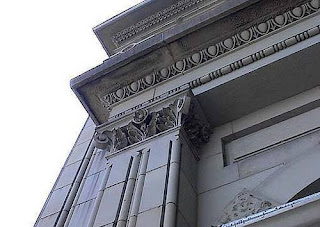 Hello, everyone, and welcome to Monday.  My wife and I spent some time this weekend chaperoning a retreat for Catholic young adults, and I have to say that it gave us some renewed optimism for the future.  Perhaps faithful Catholics are few in number these days, but to those of you who are parenting the next generation, it sure seems brighter.  I was impressed by the level of formation of the young people in attendance and their integration of their faith-- of their Catholicity-- in their everyday lives.


Because I was not in town, I did not attend the Extraordinary Form Mass at St. Elizabeth's this Sunday, but was informed that the discontinuation of the Traditional Latin Mass there is a reality.  That's not surprising, but still a disappointing development.  My prayers are with those most immediately affected.


On Sunday, doing some brief sightseeing, I saw one of the most gorgeous churches I have ever seen.  Certainly, it is one of the best I have seen outside of Europe.  Stunning in nearly every way.  And yet there near the front of the Sanctuary, not under the glorious baldacchino where the beautiful high altar was honored, but in an extension of the sanctuary beyond where the altar rail had been, was the typical table altar of 1978.  Now it is not news that such an altar would be found in such a church.  And unlike so many, it was made of noble materials.  But what struck me was that the church building had been restored in every other way-- the structure was sound, the hvac system was operating perfectly, the paintings were undimmed, the gold and marble gleamed, the stained glass windows were heavenly, and everything else was perfect to the smallest detail.


And then it hit me.  No "Latin Mass Community" would ever be given such a church for its home.  Not one that was in good repair, glorious and with a high altar that begs to heaven that a priest celebrate Mass on it.  Not one that didn't need some renovation or restoration.  Not one that was "finished", regardless of the numbers of the faithful who would gratefully fill its pews.


Having just hit the EF at a very beautiful church in its own right, but one where the stained glass windows had been replaced in the 70s (because the images of the saints were "too distracting") with the clunky, color-chunk glass so much in vogue then, and one where the steps to the sanctuary and high altar had previously been taken out, with no air conditioning, I admit to being a little nonplussed.  I don't say that I should have been, only that I was.  Of course, things are getting better.  Of course, I am profoundly grateful that any church is home to the Traditional Mass.  Of course, I should not become bitter or discouraged.  My own sins helped caused these problems, too.


But all the same, I began to wonder when the day would come when old Catholics would sit at the McDonald's in the morning and regale each other with stories about when they finally tore out the ugly table altars and put a the high altar back in.  Or the day when Father had the communion rail installed.  Or the day when they closed down the gymnasium parish due to dwindling numbers and consolidated into the beautiful and historical church they have now, with a community that was again growing in faith and size.


Because that one table altar, inserted like an alien visitor in competition with the high altar that still sat there in silent rebuke of its new neighbor, this bothered me more than a complete whitewash of the sanctuary would have done.  It sat there like some amateur artist's attempt to put a beauty mark on the face of the Mona Lisa. But it wasn't a beauty mark; it was a pimple.


And I pray for the day when the Mass is again celebrated in that otherwise glorious church where it was intended to be celebrated.


Perhaps that new generation of young Catholic adults I was privileged to meet this weekend will bring that about.  Godspeed.
Posted by thetimman at 10:35 AM

The gift of St Francis de Sales, as a permanent oratory for the Extraordinary Form, is a true miracle.

In June 1993, I was leaving St Agatha's one Sunday and a young woman and I got to talking. She told me she was on her way over to St Francis de Sales to make a visit. I told her I had never been in, but that it looked beautiful from the outside. She couldn't believe I had never been inside and insisted I follow her over to see it. When we arrived, a Mass was taking place for the Spanish speaking community, so we really couldn't walk around. My breath was taken away and I thought, "What an extraordinary place for the Latin Mass community, who could surely fill the church." (The Spanish Mass had a very small crowd.)

So that we didn't disrupt the Mass in progress, we decided to leave, but to come back for Mass early the next morning to walk around the church. We arrived the next day, but to our dismay, Mass was held in the rectory. We asked the pastor if we could see the church and after a brief hesitation he said, "You want to see the church? Come on!" Looking around at the glorious church and its noble and uplifting art and form, I prayed very deeply that the traditional Mass would be restored to St Francis de Sales. (We both did actually.)

7 years later, I moved from St Louis and forgot all about my intention. In 2005, while living in NYC, I met a young man who was visiting from St Louis who told me the Latin Mass was being moved from St Agatha's to St Francis de Sales. I could not believe it and offered many prayers of thanksgiving.

Anyway, be grateful for what you have, but keep offering your intention for the restoration of these other churches.

(Funny story about St Louis Abbey--along the same lines, but even more fantastic. I'll save that for another time.)

By chance I had been revisiting the virtual tour of St. Francis de Sales http://www.institute-christ-king.org/stlouis/stlouis-virtual-tour/, just before reading this post of yours.

The church you describe may have been beautifully maintained and comfortable, but boy, St. Francis de Sales seems so magnificent because it is home to the Mass of ages! Its High Altar radiates life, and the side altars gleam because they are used! To be sure, it'll take an enormous amount of work before SFDS will have proper heat in winter and cool air in summer, but it looks and feels so... right!

When you mentioned after your talk that you had a blog I didn't know it was THIS blog. I saw some posts on here about the Adorers back when I was first searching for information on them at the beginning of my discernment. It's just coincidence that this evening I happened to click on a link that led to one of your posts, and then I decided to check out the front page and saw this post.

I'm very glad you enjoyed the weekend. We all really enjoyed having you there, and your talk was great. Thank you very much for being there with us!

"New Generation?"
Weren't some of them quite a bit older than your own kids?