Sermon on the Feast of St. Louis 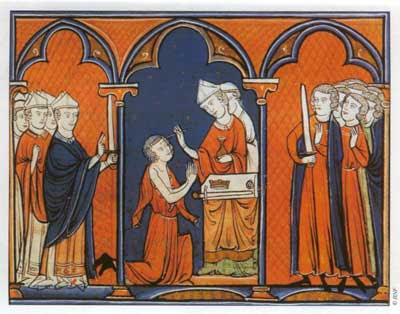 Canon Aaron B. Huberfeld, of the Institute of Christ the King Sovereign Priest, delivered the following sermon on Sunday at St. Francis de Sales Oratory in honor of the external solemnity of Saint Louis IX, whose feast day is this Thursday:


A certain nobleman went into a far country to receive for himself a kingdom, and to return. And calling his ten servants, he gave them ten pounds; and said to them: Trade till I come. But his citizens hated him; and they sent an embassy after him, saying: We will not have this man to reign over us.

My ancient history professor at university used to say that, in generations to come, historians will do away with term Middle Ages, or, at the very least, they will employ it differently. He said, they will define the Middle Ages as that long period after the fall of Rome during which men all over the continent of Europe, in Italy, Germany, France, Greece, and Russia, would claim to be the legitimate successor of the Roman emperor. They will say the Middle Ages did not end until after the First World War, when the last pretenders to Caesar’s title lost their crowns, and no fresh heads rose up to bear them. For the first time in nearly 2000 years, there was no Caesar on earth. The age of monarchy, the monarchy that defined the world as we know it, was over.

Monarchy itself, however, is never over. As our dear rector proclaimed on the feast of Christ the King, “We are all monarchists!” Whatever system of government we may live under, we are all subjects of the King of kings and Lord of lords. Nor is this an honorary or metaphorical kingship. When a 21st century descendent of some degenerate and possibly usurped royal line has a crown awkwardly placed on his head, that is, at best, a metaphorical king. Ours is no metaphor; He is the one, true King. All other kings are merely participants in the gentle rule of Him who proclaimed, all power in heaven and on earth has been given to Me. Jesus Christ, already as man, is entitled to be revered as a king, for three reasons:

1.      The man Christ Jesus is substantially united to a Divine Person, the Second Person of the Blessed Trinity, such that Jesus Christ is one Person with two natures, human and Divine. That man is a Person who must be acknowledged by the entire universe as King.


2.      The man Christ Jesus is full of grace. As God His grace is infinite; He is grace itself. And as man He source of all graces bestowed on the poor children of Eve, such that no man may ever see the face of God, except through Him.


3.      Finally, the man Christ Jesus has a kingship which He earned by His victory over death on the Cross. For which cause God hath exalted Him, and hath given Him the Name which is above every other name, that at the Name of Jesus every knee should bend, in heaven, on earth, and under the earth, and every tongue confess that Jesus Christ is Lord, to the glory of God the Father.


Our earthly rulers have received their authority from above, and they are called reflect in their own rule this threefold kingship of Christ. They have been given power not so that they may be served by their fellow men, but in order to serve them and prepare them for their supernatural end, particularly defending the Church and fostering her mission. As Pope Pius XI wrote when he instituted the feast of Christ the King:

“When once men recognize, both in private and in public life, that Christ is King, society will at last receive the great blessings of real liberty, well-ordered discipline, peace and harmony. Our Lord's regal office invests the human authority of princes and rulers with a religious significance; it ennobles the citizen's duty of obedience. It is for this reason that St. Paul, while bidding wives revere Christ in their husbands, and slaves respect Christ in their masters, warns them to give obedience to them not as men, but as the vicegerents of Christ; for it is not meet that men redeemed by Christ should serve their fellow-men. 'You are bought with a price; be not made the bond-slaves of men.' If princes and magistrates duly elected are filled with the persuasion that they rule, not by their own right, but by the mandate and in the place of the Divine King, they will exercise their authority piously and wisely, and they will make laws and administer them, having in view the common good and also the human dignity of their subjects. The result will be a stable peace and tranquillity, for there will be no longer any cause of discontent. Men will see in their king or in their rulers men like themselves, perhaps unworthy or open to criticism, but they will not on that account refuse obedience if they see reflected in them the authority of Christ God and Man."

Historians of the past two hundred years have used the term Middle Ages somewhat pejoratively. The time after the fall of the Western Roman Empire, or, more precisely, the time after the collapse of Charlemagne’s attempt at rebuilding that empire, is often referred to as the dark ages. I do not object to this term. The years before 1000 AD were indeed dark: men of the West slaughtered each other in wars on every day of the week; Church discipline was lax, corruption prevailed everywhere, and the light of the Gospel was so thoroughly snuffed out in some regions that it seemed a large part of Europe might descend into its former paganism. What I do object to is referring to the centuries following the dark ages as the Middle Ages, that is, as a mere interim period before Western man came to his own in the Renaissance and the Age of Reason. The true Renaissance, the rebirth of Christian Europe, occurred during those three glorious centuries from 1000 to 1300 AD. This was no Middle Age; it was an age of vigorous youth, an age of faith. During this time, wars among Christians diminished and were tempered, and Christians united to take back the Holy Land from the enemies of our faith. All the greatest works of theology were composed in this age, along with the most sublime melodies of Gregorian chant. And the model of just and prudent government was found in the reign of St. Louis IX of France. He did not horde the power which Christ the King had entrusted to him, nor did he hide it away without exercising it as he should. He was, rather, that good and faithful servant of the Gospel who invested his power in the welfare of his people. He held to that principle long forgotten today that a ruler’s most solemn obligation is to assure that his subjects possess the means of salvation so that they may pass from this fleeting life into the eternal reign of Our Savior Jesus Christ.

The Man Christ Jesus, substantially united in one Person to the Divine Nature, ascended into that far away heavenly country 2000 years ago to assume the Kingship which was due to Him, and there He shall sit at the right hand of the Father until He returns at the end of time. Until then, He has called certain men to share in His universal authority over mankind, in a world in which the vast majority of people, including many who call themselves Christian, do not want Christ to reign, at least not here and now. By the intercession of St. Louis, patron of this city which was once a beacon of the Catholic missions in the new world, may our own rulers come, in this new dark age, to recognize the homage which they owe to the King of the Universe, and be drawn with all their subjects into His gentle kingdom in which alone they may find salvation. Amen.