Meatless Friday Thursday: "Only God can connect all the dots. That's why dot-connecting is a hazardous pastime." 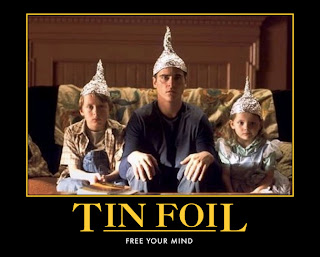 Gary North wrote the above line in an excellent article today about the intriguing nature of, and pitfalls from, conspiracy theorizing.  I thought that in advance of the ten year anniversary of the 9/11 incident it might be interesting reading.

Whatever grains of truth may or may not be involved in this or that non-official explanation for any historically important event, North is right on when he points out the absolute lack of incentive to embrace one.

I think that in some sense conspiracy theories have a lot of play among Catholics, especially the more traditional variety, because we have been on the wrong side of official history so often, especially in the last 500 years.  Ask St. Nicholas Owen about the "Reformation".  Ask the last reigning Stuart king about the "Glorious" Revolution.  And ask any Catholic who loves the liturgy, religious vocations, Catholic schools, marriage and children about the benefits of the "Spirit of Vatican II".

Be that as it may, I found this article insightful on a number of levels; if you have time, watch the videos and follow the links.  Enjoy the ride.
Posted by thetimman at 2:55 PM

I just have to say that I love the picture. _Signs_ is one of my favorite movies and the perfect complement to your post.

Yawn. This guy is just another person with an "internet expert degree". One mile long and only 1/2 inch deep.

The "experts" he touts were simply talking empty heads. Years ago on either the Discovery Channel or the History Channel, a true expert - the architect of the building and others involved in the building showed the Trade Center in a computerized image and explained why it collapsed the way it did in minute detail, leaving no stone unturned. Anybody who actually watched the very dry, but educational documentary on the plane crashes would have to come to the educated conclusion that it was indeed real. I'm sure this might be found again if one wanted to learn the truth.

Educating oneself is not what "conspiracy theorists do, however, as they just press the panic button and jump to unfounded, ridiculous conclusions. That even a smart child who had a bit of common sense would easily dismiss.

911 happened, was committed by Muslims who have admitted it in court, and we have 3,000 dead Americans as a result. There were people whom survived, however, and they have the horrible story to tell.

The "Let's roll" was witnessed by the heroes' wife who spoke to her husband minutes before he attacked the terrorists. She does have a book out about her husband and this fateful day, but that would require educating oneself too, and that is just too hard for people whom would rather believe our Christian president blew up 3,000 of his fellow Americans.

I don't think he is embracing any conspiracy theory in the article, but pointing them out and making the point that nobody has the facts, time or incentive to be "that guy", whatever the compelling, or not-so-compelling, reasons to doubt the government line on a particular event. Perhaps the article was too boring to wade through it.

You had me until you called G W Bush (of the pro abortion and pro gay marriage Bush's) a Christian, LOL, not. The mere collapse of WTC 7 is a prima facia case of a controlled demolition and hence an inside job. There has been no rebuttal, and there never will be, just more ad hominem attacks, whatever. The evidence that 911 was an inside job is not compelling. it's overwhelming. By now dogs know it. If you don't know it by now it's because you don't want to know, God understands that and he'll probably forgive it.

I LOVE this blogsite!
-cdg

I wasn't sure whether the author was promoting any of the conspiracies. Yes, it costs a person much of his life and livelihood to develop and publicly espouse such a conspiracy theory.

That said, let's suppose the WTC bldgs went down with the aid of internal explosives. What is so "scary" about that theory? Why does that mean that some evil types in the government were complicit? Why would that not point to the possibility that the Islamic terrorists (Are we doubting that there were Islamic terrorists who hijacked the planes?) also had accomplice Islamic terrorists inside those buildings? Why does that blow a hole in the belief that we were attacked by Muslim terrorists who flew planes into those bldgs on 9-11-01? I don't see how the demolition theory, true or not, implicates the idea of an "inside job" or federal complicity.

The most important, and perhaps only, real failure on the part of the U.S. government to prevent 9-11 was, and remains even more so today, the failure of its immigration policies. Even if the existing laws and criteria for rejecting visas/entry were followed, would these men have ever been in the US? Appropriate enforcement of our immigration laws would have also assured that the would have left on time--if they were originally here legally.

You can find out the information that was explained in great detail, with the architect of the building being interviewed about why his building did implode. You, are not interested in the truth, so you won't look into it. He addressed every single question that a conspiracy person might have with computer images.

It is sad that the architect isn't as smart as you.