The Morality of the Bullfight 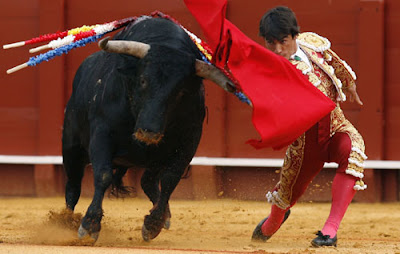 Always topical, Saint Louis Catholic is here to set your mind at ease on one of the most contentious and current controversies facing Catholics in the American Midwest:  the morality of the Spanish corrida de toros, or bullfight.

I know, I know.  You were just discussing this very topic with your spouse at breakfast.  You already made an appointment with your spiritual director concerning it.  But, since I ran a story this week on the last bullfight in Catalonia, I thought this might be of use to anyone who likes, hates, or who wants to see, someday, a bullfight.

As usual, the Catholic Encyclopedia has good information.  And, unsurprisingly, the Popes have weighed in the morality of it.

The short answer to the question of whether it is morally licit to see, promote, or participate in a bullfight is this:  yes.

After an initial condemnation of the bullfighting by Pope St. Pius V in 1567, this condemnation was modified and later mostly lifted by subsequent Popes.  IN 1597, Pope Clement VIII reduced any prohibition to a mere common law and this prohibition was limited only to the clergy and on holidays.

Now, it is important to note that the modern bullfight was developed in the mid-eighteenth century, and thus all of the prohibitions, large and small, were directed against a different type of bullfight, the origins of which can be traced to Moorish Spain.  If you are interested in the history of the bullfight, click here to read the Catholic Encyclopedia entry.

As a moral issue, the consensus is that there is nothing immoral in the bullfight. From the CE entry:

Moralists as a rule are of the opinion that bull-fighting as practised in Spain is not forbidden by the natural law, since the skill and dexterity of the athletes precludes immediate danger of death or of serious injury (cf. P.V, Casus conscientiae, Vromant, Brussels, 1895, 3d ed., I, 353, 354; Gury-Ferreres, Comp. Th. mor., Barcelona, 1906, I, n. 45). Even in Spain and Spanish America they have been forbidden to clergymen and religious, by Pius V, as well as by the Plenary Council for Spanish America (n. 650; cf. also C. prov., Vallisol., I, p. 5, tit. 1, n. 11). The Bishop of Ciudad Rodrigo received the same answer from the Penitentiaria (19 September, 1893).

So, there you have it.  You may now train to be a matador.  Or at least see a bullfight with a clean conscience.  And as to the sensibilities of some, the Catholic Encyclopedia hits the nail with an observation I made the other day:

It is worthy of note that foreigners who have been present at bull-fights are not so harsh in their judgments as those who have formed an opinion from what they have heard about them from the societies for the prevention of cruelty to animals.
Posted by thetimman at 11:01 AM

The CE hits it on the head in another area as well. All considerations of the morality of the bull fight are in light of the risk to human persons, not whether it is moral to kill the bull (I think that's assumed). What an important distinction. All too often the focus is on the animal or nature or the environment, but never on the true nature and dignity of man.

"The importance of ecology is no longer disputed. We must listen to the language of nature and we must answer accordingly. Yet I would like to underline a further point that is still largely disregarded, today as in the past: there is also an ecology of man. Man too has a nature that he must respect and that he cannot manipulate at will. Man is not merely self-creating freedom. Man does not create himself. He is intellect and will, but he is also nature, and his will is rightly ordered if he listens to his nature, respects it and accepts himself for who he is, as one who did not create himself. In this way, and in no other, is true human freedom fulfilled." (ADDRESS OF POPE BENEDICT XVI TO THE GERMAN PARLIAMENT (BUNDESTAG) 22 SEPTEMBER 2011)

So this seals it. Michael Vick can never ascend to the Papacy. Check.

One of the Timman's fantasy football rivals

And on a serious note, I don't know, Hussar, whether it follows from Pope Benedict's statement, whether it should necessarily be assumed that it is moral to kill the bull. Or force pit bulls to fight to the death, or what have you.

Is it moral to kill a frog by putting a firecracker in its mouth? I suspect not.

Just because the "ecology of man" is superior to any sort of "ecology to animals or trees or plants or some such" doesn't mean that there are no moral restrictions as to such matters, just that such moral restrictions must flow from the proper unederstanding of an "ecology man".

Not a Vegan or Member of PETA

Dear "Not a Vegan or Member of PETA,"

I believe that Pope Benedict's comments support what you say, that is, there are moral restrictions on such matters, just not to the exclusion, or even on an equal footing with, the ecology of man. I was simply highlighting that both the Pope's address and the Catholic Encyclopedia put considerations of man and his dignity above and/or before considerations of the animal/tree/ozone. And this is where they differ from animal rights groups and other post-modern approaches that put the environment/animal/whatever on equal footing or even above considerations of the human person and his dignity. See also, St. Thomas Aquinas' Contra Gentiles: Book Three: Part II: Chapter 112; and the Catholic Encyclopedia's entry on Cruelty to Animals.

So, in sum, I guess my above comments weren't really about whether killing the bull is moral or not, but rather I was just pointing out that the CE article and the Holy Father frame those issues in light of man and his dignity. Sorry for the confusion.