This Is Not Catholic 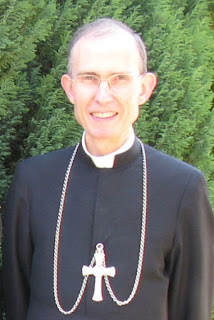 I offer this one in the ongoing SSPX negotiation turmoil.  In the midst of the meeting of Bishop Fellay with the CDF yesterday, Rorate Caeli published a translation of a French periodical's interview with one of the four SSPX bishops, Bishop Tissier de Mallerais.  This interview was presented to show the gulf in opinions between Bishop Fellay, the Superior General, on the one hand (pro-reconciliation) and Bishops Tissier de Mallerais, Gallareta, and Williamson on the other (not-so-much).


However, what struck me forcibly was something much more serious.  And though the Bishop knows more about the political situation than I do, I will not shrink from stating that his interview evidences an attitude that cannot be described as Catholic.   This is just an excerpt, and to prevent this being taken out of context in your minds, please read the whole post, above:

RIVAROL: The imminent "reintegration" of the Society of Saint Pius X (SSPX) within the "official Church" is mentioned widely. What is it exactly?

Bp. TISSIER de MALLERAIS : “Reintegration”: the word is false. The Society of Saint Pius X (SSPX) has never left the Church. It is in the heart of the Church. There where the authentic preaching of the faith is, there is the Church. This project of "officialization" of the SSPX leaves me indifferent. We have no need of it, and the Church has no need of it. We are already on the pinnacle, as a sign of contradiction, that attracts those noble souls, that attract lots of young priests, despite our pariah status. One would wish to place our lamp under the bushel for our integration in the Conciliar world. This status that is proposed to us, of a personal prelature, analogous to that of Opus Dei, is a status for a state of peace. But we are currently in a state of war in the Church. It would be a contradiction to wish to "regularize the war".

R. : But some in the Society of Saint Pius X think that it would be in fact a good thing. Are you not bothered by this "irregular" situation?

Bp. T.: The irregularity is not ours. It is that of Rome. A Modernist Rome. A Liberal Rome that has renounced Christ the King. A Rome that had been condemned in advance by all Popes up until the eve of the [Second Vatican] Council. On the other hand, the experience of the priestly societies that have joined current Rome is that all, the ones after the others, included Campos and the Good Shepherd, have been constrained to accept the Vatican II Council. And we know what has become of Bp. Rifan, of Campos, who now has no objection to celebrating the new mass and who has forbidden his priests from criticizing the Council!


His Excellency, like some others in this camp of the Society, takes the position that it is not the SSPX who needs to reconcile to the Church, but "Modernist Rome" that needs to convert to the Church.  However, in this analogy, the Church can only mean the SSPX.  As in, the SSPX has the faith, Rome doesn't, so "Rome" better convert, and then we can let them join us.  And this is not Catholic.  Not only that, but it shows that there is no way in the actual world of facts that he or the other two opposition bishops would consent to be reconciled with the Holy Father.

Christ founded one Church, the Catholic Church.  It is a visible Church, with a visible head.  Christ made Peter, a real man in time, and his successors, real men in time, the principle of unity.  Yes, Catholics must believe dogmas and doctrines to be Catholic.  But it is unity with Peter that is the sign and certitude of being Catholic.  You don't like this system?  Neither did Luther, neither did the schismatic East, neither does any Protestant with his Bible and self-assumed infallibility.


Bishop Tissier de Mallerais, makes some accurate points.  Yes, there are many in Rome who do not hold to the faith.  Yes, the Church since the council is a mess, temporally speaking.  Yes, there is a "risk" in working within the structure of the Church.  Tell me about it.  Yes, the Council is cited by many as an excuse to hold heretical opinions. But that doesn't make those persons right.  What matters is this:  is Pope Benedict the XVI teaching heresy, is he the Pope or not?


In the end, however the Bishop wants to spin it, if he really means what he says, he is a de facto sedevacantist.  In other words, he acts in that the chair of Peter is empty, because a Pope who is a public heretic (according to some theologians) loses his office.  It is a dangerous charge and one beyond any man's pay grade.  But if he believes it, say and have done.  Just like a heretical LCWR nun-theologian, Pope Benedict need not be obeyed in a matter in which he has authority, if he is Pope.

This whole idea of "Rome"-- and if that is not "the Church", then what is it?-- needing to "convert" before the good bishop will condescend to join it is a position that should not be held by a Catholic.  And if it meant something else, what does it mean?  This is merely an excuse, and a clear sign that there is NO WAY the three will consent to any agreement.  The excommunications don't exist.  The traditional Mass is their right, and every priest's right, to celebrate.  They needn't celebrate the new Mass.  They can do everything they are doing and will have their suspensions lifted.  What is the problem?  That the Pope will appoint future Bishops?  Isn't that how the Church works?  That (assuming a prelature) Bishops of dioceses where the SSPX does not currently have a house will have a say on whether they can put one there? Isn't that how the Church works?  That there is a danger of compromising the faith?  Doesn't everyone run that danger every single day in this vale of tears?

What will suffice?  They will come in only when every Catholic signs a petition and admits the SSPX was right all along?  They will only come in when every bishop, priest and layman is perfect?  Would they come in even if that happened?


The time has come to declare ourselves.  Are we Catholics or not?


God's providence has put Bishop Fellay in charge of the Society at this time.  The reasons for the dispute have been removed, one by one, and thank God that Bishop Fellay can see it.  Once the SSPX receives faculties and pontifical right, they are in a strong position of unquestioned legitimacy.  And those who wait for the Pope to "convert", let them wait on.

Posted by thetimman at 8:37 AM

Here is a question of local interest. I don't know how the Society manages jurisdictions but on my last glance Bp. Williamson was the prelate for the local SSPX community. If Bp. Fellay reconciles and Bps. Williamson and Tissier do not are not our friends in St. Louis stranded. Will they split into reconciliationist and anti-reconciliation camps?

The United States District Superior - Fr. Arnaud Rostand - along with other SSPX districts have pledged their obedience to follow Bp. Fellay, who is the Superior General of the SSPX, if he accepts the offer of reintegration from the Holy See. If there is some kind of a split, this should not affect local communities anywhere in the world unless the community is controlled by a bishop or priest who breaks with the SSPX. This will be an internal matter for the SSPX to work out for themselves, maybe with the help of Rome. In short, St. Mary's Assumption in St. Louis will be fine. The pastor - Fr. Frank Kurtz - has said so publicly.

Thanks for your thoughtful clarification. Sounds like all will be well. I've been in St. Mary's Assumption once and I'd love to attend Mass there.

One needs to recall that His Excellency was once against the ordination of the Bishops by Archbishop Lefebvre in 1988, yet supported it in the end.

It comes down to recognizing proper authority. The Pope is the head of the one true Church - Bishop Fellay is the rightful authority and leader of the Society. In their negotiations and discussions, both are working towards full recognition. To reject a positive outcome is a potentially dangerous proposition.

But Bishop Tissier de Mallerais is right that it's not 'reintegration', as if the Society has left the Church - it never has. That would better apply to the renegade nuns and theologians currently in "full regularization", once having come to their senses.

May the most Sacred Heart of Jesus intercede for us on this issue!

"The United States District Superior - Fr. Arnaud Rostand - along with other SSPX districts have pledged their obedience to follow Bp. Fellay, who is the Superior General of the SSPX"

Unfortunately there are the few of those in the SSPX Order who are giving THEIR personal opinions posting all over the Internet - the majority of Catholic laity and Priests are posting themselves in front of the Tabernacle.

Pray for all of us, Long-Skirts. This is a crucial moment.

Mutiny
Of
Thy
Bounty

While Christ deplores
All mutinous bores
Who make His Church their own!