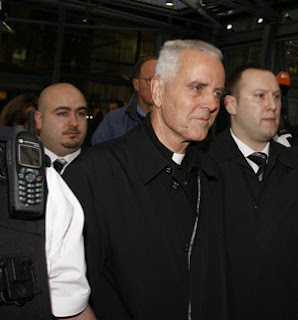 Hard on the heels of his call for the SSPX General Chapter to oust Bishop Fellay, the episcopal car accident (in the sense that you just can't look away) Bishop Bernard Williamson speculates on false flag attacks at the London Olympics.

I'm as open to conspiracy theories as the next traditionalist cowering in a barricaded broom closet while the inmates take over the asylum. But, I'm not seeing why Bp. Williamson thinks that those who wish to explicitly – or even implicitly -- attack Christ would regard the Olympic Games as a supremely tempting target. Unless the conspirators portrayed themselves as angry Christians, in which case – as in any case --they’d immediately be filed under “crazy” rather than “Christian”.

However, I sympathize with Bp. Williamson to some extent. The atmosphere in the broom closet can get mighty oppressive.

Such treachery. As has been said before, this Excellency knows neither prudence nor good judgement let alone humble priestly obedience to he who is his rightful authority and to whom respect is owed. May His Excellency Bishop Fellay, in union with the Holy Father, continue to bear these burdens with resolute strength, despite them who would derail any progress towards restoration.

O Jesus, Eternal Priest, keep Thy priests within the shelter of Thy Sacred Heart, where none may touch them. Keep unstained their anointed hands, which daily touch Thy Sacred Body. Keep unsullied their lips, daily purpled with Thy Precious Blood. Keep pure and unworldly their hearts, sealed with the sublime mark of Thy Priesthood. Let Thy Holy Love surround them from the world's contagion. Bless their labors with abundant fruit. May the souls to whom they minister be their joy and consolation here, and their everlasting crown hereafter. Amen.

Sacred Heart of Jesus, Eternal High Priest, let Thy love flow into the hearts of Thy priests and transform them into living images of Thee. By Thy grace, make them true apostles of Thy Sacred Heart. I pray for the fulfillment of the promise Thou madest to St. Margaret Mary: "I will give to priests the gift of touching the most hardened hearts." on here, and their everlasting crown hereafter. May Thy Kingdom come to the hearts of all through the ministry of holy priests! Amen.

"It's the way the world works," exactly so. Can you imagine that the rich and powerful would leave their fortunes and destinies to the whims of the masses, or the mythological free market? It's untenable. If you haven't realized by now that virtually every American conflict of the last 100 or more years has been launched in the wake of a false flag operation or a variation thereof you're to naive to discuss such matters. The Maine, the Lusitania, the Sussex, the Athenia, Pearl Harbor, the Gulf of Tonkin, the Lavon Affair, the USS Liberty, WMD's, 911, and so it goes.
You may not take an interest in politics, but politics will certainly take an interest in you.
Is there a conspiracy to promote the idea of Global Warming, or the Homosexual Agenda? Was the revolution in the Catholic church a mere matter of chance and circumstance or are you also a conspiracy nut? Bishop Williamson is not afraid to recognize that the ways to alienate modern man from God are legion, not the least of which is war and the falsehoods which lead to war. Nowhere is this more evident then Europe, where the Faith is as dead as a body without breath. If only more priest had this kind of courage and conviction but alas, they are all to prudent and temperate, even as the wolves rip out the throats of the sheep by the millions.
Thank God we finally have the Luminous Mysteries, they'll tell us what to do.

StGuy, sorry, you had posted 2 nearly identical comments, and in tryin to delete one and publish the other I managed to delete both. Apologies.

It is certain that Screwtape indulges in conspiracies. What is uncertain is whether poor mortals can ever see them in their clear outlines.

I think I can safely say it is the heights of presumption to think we can detect the ways of the Satan by following him on the internet.

He doesn't have a blog.

If all we had to do to stay ahead of Satan's game was follow him with search engines everything would be quite, quite easy.