Step One on the Way to the Supreme Oracle: Private Lawsuit against Contraceptive Mandate Thrown Out by District Court 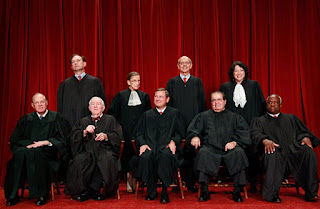 Not surprising, and I hope the case is appealed.  If so, look for the Supreme Court to tell us how paying to kill babies is actually part of the Catholic Faith.  Oh wait, Justice Roberts is Catholic so there's NO WAY he'll rule against us.

U.S. District Judge Carol E. Jackson in St. Louis dismissed the lawsuit filed earlier this year by Frank O’Brien and his O’Brien Industrial Holdings LLC, which alleged the mandate unconstitutionally violated his religious beliefs and the Catholic philosophy he applied in running his business.

“This court rejects the proposition that requiring indirect financial support of a practice, from which the plaintiff himself abstains according to his religious principles, constitutes a substantial burden on plaintiff’s religious exercise,” Jackson said in her 29-page ruling on Sept. 28.

The contraception requirement is part of President Barack Obama’s 2010 Patient Protection and Affordable Care Act, intended to create almost-universal health-care insurance coverage. Attorneys for O’Brien and his business today filed notice of their intent to appeal the judge’s decision.

I have seen cases that the SC has decided not to review. What happens to those cases?
It seems that the SC could decide not to hear this case if it reaches their doorstep. Why does the SC have the right to ignore any case that reaches them?

The Supreme Court is the only Constitutionally mandated court. It has original jurisdiction in very few cases, and there is the absolute right to appeal to it in very few others. All other cases are its to accept or decline as it sees fit. A party seeks a writ of certiorari, and if four justices agree, the court takes the case. It grants certiorari less than 1% of the time. Those cases it declines are left as the Court of Appeals had decided them. Those cases are binding precedent only in those Circuits.

Perhaps a recent photo of the current supreme court judges would be appropriate.

So, an employer should not pay an employee enough money that (s)he could spend on some sinful behavior, eh? No money for pot either? Shame on employers who pay people who might choose to use their income for sinful purposes.