Always a Master of Timing... 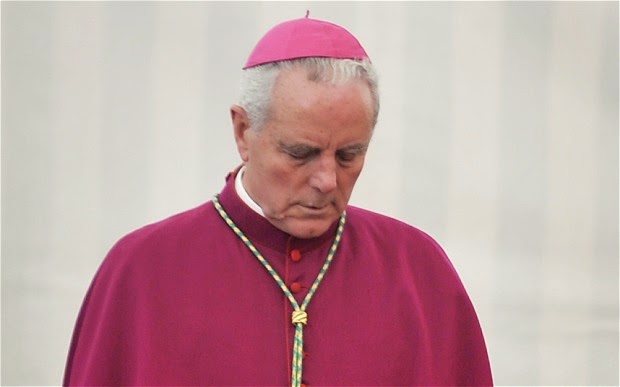 Rorate reports that Bishop Richard Williamson, formerly of the SSPX, will (presumably illicitly) consecrate one or perhaps two new bishops, as soon as the Feast of St. Joseph, March 19.

You undoubtedly recall that the making public of Bishop Williamson's holocaust-musing interview caused great damage to the Pope and the SSPX at the time of the lifting of the Lefebvre/Castro-Mayer/SSPX 4 excommunications.

In this Jubilee Year of Mercy, Bishop Williamson certainly seems to be gauging the boundaries of it.  Not content with one lifting of one excommunication, perhaps he will seek a second.

Now, watch for the media to lump this action in with either 1) the SSPX and their status; or, 2) all traditional Catholics.  Or both.
Posted by thetimman at 3:25 PM

Bishop Williamson is truly on the peripheries.

Time to put all those homilies about Pharisaic laws into effect. After all, the good bishop is trying to bring people closer to God. Wonder if Francis will be appreciative?

Can't wait to see how this one plays out.

In defense of Bishop Williamson, the expulsion of this bishop was wrong because it was timed with the general chapter which ensured his expulsion so as to make overtures with Rome in a way the Late Archbishop refused. How can a group of people fighting against modernism be joined in a way that shows reconciliation to the perpetrators of this great mess in which we live everyday? I thought it extreme of Williamson at first, but it does make sense. If Fellay wants to join with Rome by having a private Prelature, that reduces the fight we are in to just a battle of words, because in the end, as long as the SSPX say, "Well, we have our mass and are "legit" we don't care to battle anymore. Meanwhile, from the peripheries, under the threat of this or that, it is apparent that a battle of good and evil is taking place. Rome must convert. Plus, if Fellay wants to make a deal with Rome, why is it in secret, and up for grabs just about anybody to discern what is going on. In this way, he acts like pope Francis, just leading us down the road of destruction, but without explicitly saying what he wants--it is left to you and me to discern--which is what we have done. If Fellay is misunderstood, he has had 3 years to repair the damage he has done to his priests who left the Society, because they felt betrayed. Is it not evident that something is wrong, when 3 of the SSPX bishops write to the Fellay and admonish him? It means Fellay is not speaking for the entire group anymore and has lost their confidence. Make no mistake, this move is not done rashly. We can call Williamson racist or whatever, because that sticks.. but in my gut, it's like 1988 again. When the Archbishop did what he did, most people shrieked. I probably would have if I knew what was going on. I was even scandalized by it much later on, but have come to understand and accept it. Without the prickly pins in the sides of the Rome, the entire state of the Church would be much worse. This consecration tomorrow only means that things are going to get much worse. While it is confusing, I cannot judge Williamson's actions because he is acting out of what he considers prudent. The next question to ask and to watch unfold is what will Fellay and Pfluger do considering Rome, and will the SSPX finally oust Fellay.

By the way, this is the post which Rorate (New Catholic) seems to have forgotten about:

Regardless of [Bsp. Tissier's] other opinions, there is one point on which we completely agree with Bp. T.de Mallerais:
"R.: Some believe that the statute of personal prelature proposed to you will provide sufficient guarantee to you concerning all danger of abandoning the combat for the faith. Bp. T.: That is incorrect. According to the project of prelature, we would not be free to create new priories without the permission of the local bishops and, additionally, all our recent foundations would have to be confirmed by these same bishops. It would thus mean subjugating us quite unnecessarily to an overall Modernist episcopate."

Here is a sermon he (Bsp. Tissier) gave at the ordination of new SSPX priest in 2015 in which he said no union with Rome is possible: