"Indissolubility is not a curse, it is the great beauty of the marital relationship." 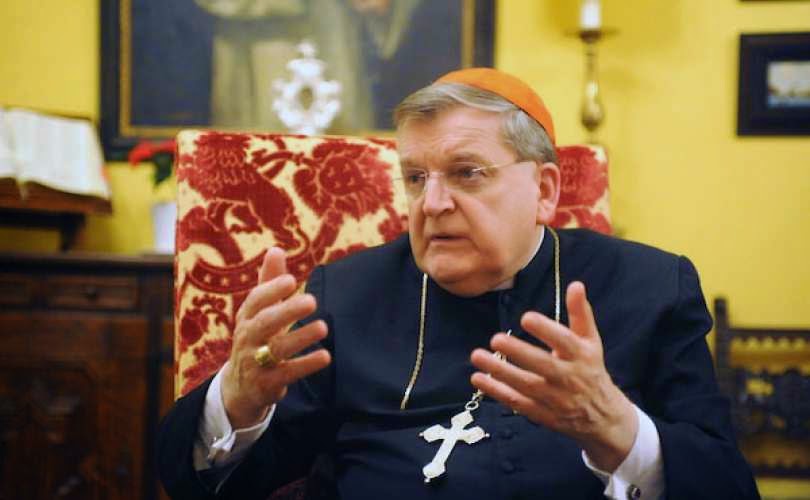 Cardinal Burke is a good interview at any time, but this interview at LifesiteNews is very, very good.  Just hearing the truth out of the mouth of anyone on the Church's payroll is welcome these days. But in Cardinal Burke we have so much more than that.  He is the standard-bearer among the hierarchy for true Catholic Charity-- love and truth, mercy and justice united. We must remain steadfast; we can do nothing else.

Just a few money quotes from an interview that should be read-- and studied-- in its entirety:


LSN: It was said after the publication of the relatio post disceptationem that there was a manipulation that consisted in putting into the synod questions that actually have nothing to do with the family. Would you accept to express yourself on how and why this “manipulation” took place? Who is benefiting?

CB: It's clear that there was a manipulation because the actual interventions of the members of the synod were not published, and only the mid-term report, or the “relatio post disceptationem”, was given, which had really nothing to do with what was being presented in the synod. And so it's clear to me that there were individuals who obviously had a very strong influence on the synod process who were pushing an agenda which has nothing to do with the truth about marriage as Our Lord Himself teaches it to us, as it is handed down to us in the Church. That agenda had to do with trying to justify extra-marital sexual relations and sexual acts between persons of the same sex and, in a way, clearly to relativize and even to obscure the beauty of the Church's teaching on marriage as a faithful, indissoluble, procreative union of one man and one woman.

LSN: Repeatedly, even the synod fathers who have touted the issues of “remarriage” of divorcee and homosexual or non-marital unions have repeated that the question is not doctrinal, but pastoral. What is your response to that?

CB: That simply is a false distinction. There cannot be anything that's truly pastorally sound which is not doctrinally sound. In other words: you cannot divide the truth from love. In other words still: it can't be loving not to live the truth. And so to say that we're just making pastoral changes that have nothing to do with doctrine is false. If you admit persons who are in irregular matrimonial unions to Holy Communion, then you're directly making a statement about the indissolubility of marriage, because Our Lord said: “He who divorces his wife and marries another commits adultery.” And the person in an irregular matrimonial union is living in a publicly adulterous state. If you give Holy Communion to that person then somehow you're saying that this is alright doctrinally. But it can't be.

LSN: So the simple fact of putting that under discussion is already an error.

CB: Yes. In fact I have asked more than once that these subjects which have nothing to do with the truth about marriage be taken out of the agenda of the synod. [If people want to discuss these questions, fine, but they have nothing to do with the Church's teaching on marriage.] And the same goes for the question of sexual acts between people of the same sex, and so forth.

LSN: How can the Church really help all those concerned: abandoned spouses, children of legitimate marriages who are hurt by the divorce of their parents, people who are struggling with homosexual tendencies or who have in a way let themselves be “trapped” into an illegitimate union? And what should our attitude be: the attitude of the faithful?

CB: What the Church can do, and that is the greatest act of love on the part of the Church, is to present the teaching on marriage, the teaching that comes from Christ's very words, the teaching which has been constant in the tradition, to everyone, as a sign of hope for them. And also, to help them to recognize the sinfulness of the situation in which they find themselves, and at the same time  call them to leave that sinful situation and to find a way to live in accord with the truth. And that's the only way the Church can help. That was my great hope for the synod: that the synod would hold up to the world the great beauty of marriage, and that beauty is the truth about marriage. I always say to people: indissolubility is not a curse, it is the great beauty of the marital relationship. This is what gives beauty to the relationship between a man and a woman, that the union is indissoluble, that it is faithful, that it is procreative. But now one almost begins to get the impression that somehow the Church is ashamed of the very beautiful treasure which we have in marriage, as God made man and woman from the beginning.

LSN: Would you agree, as a number of people are saying, that many Catholic marriages today, through insufficient preparation or ignorance of the meaning of the marriage vows, are often invalid? What was your specific experience on this point as prefect of supreme Tribunal of the Apostolic Signatura?

CB: I thing it's very unwarranted to make general statements about the number of marriages which are valid or invalid. Each marriage must be examined, and the fact that people may have not been well catechized and so forth certainly can weaken them for the married life, but it would not necessarily be an indication that they would give an invalid matrimonial consent, because nature itself teaches us about marriage. We saw this at the Apostolic Signatura: yes, there were more declarations of nullity of marriage but in examining those cases there were many that came forward in which the nullity of marriage was not established, was not shown to be true.

LSN: Do you think there is a link between the “death of the cult” – non adoring, anthropocentric liturgy – and the culture of death?

CB: I'm very convinced that where abuses entered into liturgical practice in the Church, abuses which reflected a very anthropocentric direction, in other words, where the sacred worship began to be presented as the activity of man instead of the action of God in our midst, that clearly has led people in a wrong direction, and has had a very negative impact on the life of every individual and in a particular way upon married life. The beauty of married life is in a very particular way perceived and confirmed in the Eucharistic Sacrifice.n to be true.

LSN: How can we best remain faithful to the Church and to the Pope in these troubled times?

CB: By adhering very clearly to what the Church has always taught and practiced; this is our anchor. Our faith is not in individual persons, our faith is in Jesus Christ. He alone is our salvation, and He is alive for us in the Church through her teaching, through her sacraments, and through her discipline. I say to people – because many people today are in communication with me who find themselves quite confused, they're worried and upset – no, we must remain calm, and we must remain full of hope by coming to an ever deeper appreciation of the truth of our faith, and adhering to that. That's unchanging, and that will be victorious in the end. Christ told Saint Peter when he made his confession of faith: "The gates of hell will not prevail against the Church." We know that this is true, and we have to suffer in the meantime for the truth, but we must be confident that Our Lord will win the victory in the end.

May God bless Cardinal Burke, and may He protect His Church.

Posted by thetimman at 2:04 PM