Burying the Lead on Altar Service and Vocations 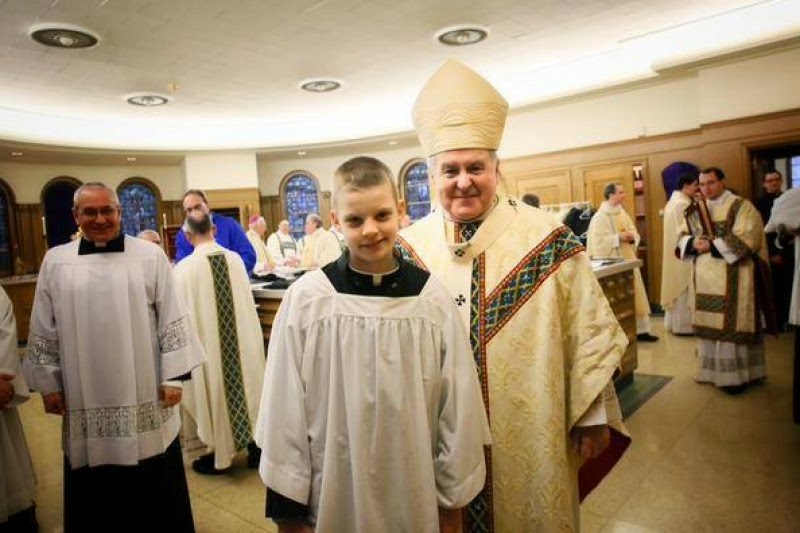 I have wanted to write about a story that was published in the St. Louis Review back on April 8. It is the heartwarming story of a little boy fighting cancer who, when approached by the Make-a-Wish Foundation, said he wanted to be a priest. His Grace, Archbishop Carlson, along with Master of Ceremonies Fr. Nick Smith, made that dream come true by, among other activities, involving him in the Holy Thursday Chrism Mass at the Cathedral.

Like I said, great story.  God bless this boy (there is a gofundme page set up by a family friend to cover medical expenses here), Archbishop Carlson, and all those who helped.

However, I think the most important element of this story was completely overlooked by the Review.  They buried the lead, as they say.

I ask you, how did the Archbishop make this boy's wish to be a "priest for a day" come true?  By dressing him in the cassock and surplice.  By allowing him to serve at the altar.

Actions speak louder than words. And here is an action that speaks volumes.  Altar service is inextricably linked to the priesthood.

This act of kindness occurred in an Archdiocese, like nearly every other Archdiocese in the world, that still allows girls to serve at the altar.

Yet it was instinctive, so instinctive that no one publishing or reading the Review even questioned it, that when a boy wanted to "be a priest for a day" he served at the altar, wearing the traditional attire of the acolyte.

So it seems to me that you can have it one of two ways: either limit altar service to males, or advocate the impossibility that females can be priests.  Because that is what our actions say, louder than our rationalizations. The only question facing the Church today, if she will be honest enough and brave enough to face it, is which will it be?

As a thought experiment, I have taken the liberty of rewriting the Review's headline:

I don't know, it sounds right to me.

And, in a perfect world, that issue of the Review could include an editorial calling for an end to the novelty of altar girls.  Cite this feel-good story, cite Pope St. John Paul II (among other popes), and draw the necessary conclusions.  See, it writes itself.
Posted by thetimman at 10:34 AM

So it seems to me that you can have it one of two ways: either limit altar service to males, or advocate the impossibility that females can be priests.

In the context of the current extensive use of girls in altar service, I don't think that it's a surprise that most polls show large numbers, sometimes even a majority, of American Catholics favoring the ordination of women.

In my experience, those who favor altar girls nonetheless will usually insist that they are not pushing women's ordination. But when pressed on why the logic that permits girls to serve at the altar shouldn't also argue in favor of women priests, they usually have no coherent answer beyond "The Church doesn't allow that." And it seems clear that, if Pope tomorrow suddenly *did* say it was allowed, most would simply accept it. It's a positivist argument. They have no real understanding of the nature of the priesthood, or knowledge of the teaching of the Church and its reasoning.

Well, the Episcopal Church certainly allows women to be ordained - indeed, to the point that almost half of their priests are women. The result is not a shortage of ministers, but a shortage of laity. Somehow this point always seems to escape the most aggressive advocates of "expanding the role of women" in the sanctuary.