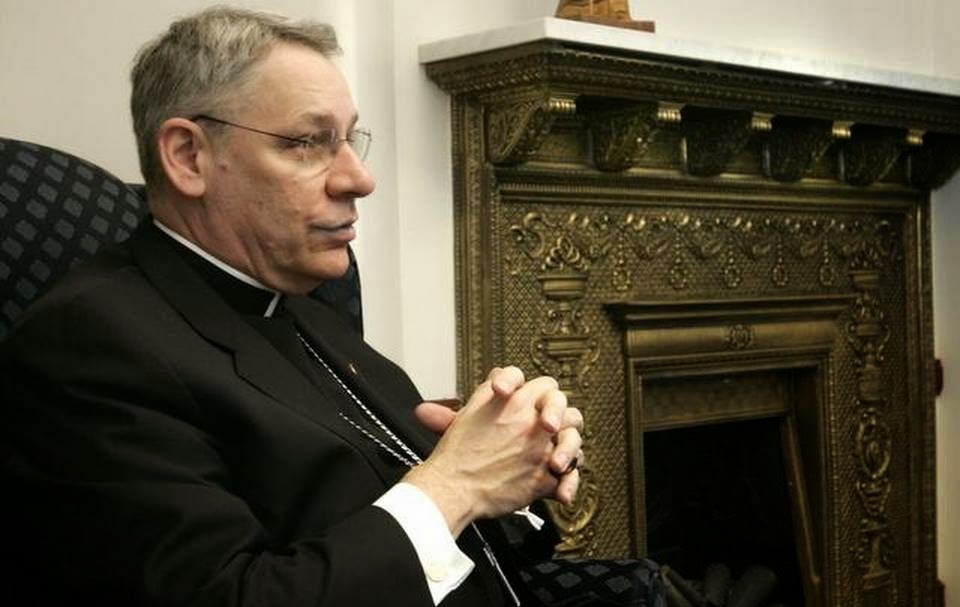 I awoke today to see a text from my friend--fittingly, the former Kansas City Catholic-- informing me that His Excellency Robert Finn, Bishop of Kansas City-St. Joseph, had resigned.This sad story comes from the Kansas City Star, as does the above photo. I include only the first three paragraphs, because this will be the official template for every story you see about it today:

Finn pleaded guilty in 2013 to failing to report a suspected priestly child abuser in the first known case of a pope sanctioning bishops for covering up for pedophiles.

The Vatican said Tuesday that Bishop Robert Finn had offered his resignation under the code of canon law that allows bishops to resign early for illness or some “grave” reason that makes them unfit for office. It didn’t provide a reason.

That's all the press thinks of this, or at least it is all it wants you to know. Make no mistake, Bishop Finn, like so many others in this regime of "humility", in this year of "mercy", is a victim of Catholic orthodoxy.

While we are waiting for the Holy Father to issue a strong statement of support in favor of Archbishop Cordileone in San Francisco, under vicious attack by the wealthy and influential sodomites and adulterers publicly calling for his head (just like Bishop Finn, here in the heartland), note the very liberal Bishop Juan Barros (only recently appointed by His Holiness over strong objections to allegations of his personal connection to an actual clerical child abuser), doesn't appear to be going anywhere.

That appointment was made in March 2015, long after Pope Francis sent a bishop to investigate the Kansas City/St. Joseph Diocese.

And, more to the point, the prosecution against Bishop Finn in the Ratigan failure-to-report case was a persecution-dressed-as-prosecution if there ever was one.  Bishop Finn had his own lawyers, of course, but I have always thought it a mistake to plead guilty.  If the world wants to persecute us, let them do their own dirty work.

But that is water under the bridge.  Friends, people talk about a coming persecution.  Wake up.  It is here.  It comes for you and me.

No servant is greater than his Master.  If the world hates you, know that it hated Christ first.  All who live godly will suffer persecution.

Man up.  In our sinfulness, the Lord has made the effeminate to rule over us.

May Bishop Finn find peace, and strength, and I pray that for us all.

Can't wait to hear where the Vatican will "promote" Archbishop Cordialone of San Francisco!

As long as it's not to Kansas City.

When Burke came into town for the ordinations at St. Francis de Sales, there were 3 bishops present as witnesses. They were Finn, Cordileone, and an auxiliary bishop from Chicago.

Finnished said...
"As long as it's not to Kansas City."

And you shall know the truth, and the truth shall make you free. (John 8:32)

Regardless of the gravity of his offense (and it was not grave, in my opinion, but naively negligent at worst), we all know we this is happening: if you are a Catholic, all they need is a pretext and you're gone immediately.

As a lawyer, you are missing the bigger picture. This isn't a 'church purge.' Bishop Finn was convicted of the misdemeanor crime of failure to report a priest suspected of child sex abuse to government authorities.

Because of that, there are court orders that define this about Bishop Finn: he is not allowed to be left alone with children, could not coach a CYC team, and cannot visit grade schools without supervision.

No matter how you want to spin it, protecting a priest with thousands of pornographic images of grade school children on church grounds isn't morally, ethically or legally justified. Given the heightened awareness of this issue after so much bad press brought on by pedophile priests around the world, you would think he would have reported this to the police as mandated by the laws of the United States of America.

TIYS, glad to see you back; I thought you had sworn me off. While I don't want to relitigate this here, and am certainly unqualified to do so, let me say a couple of things.

First, your point about the terms of the settlement being awkward is a good one. But if we look at this as lawyers, as you said, the "thing" of which he pled guilty is this, and this alone: not reporting quickly enough one single photograph possessed by Ratigan that in itself was not pornographic.

It would not excuse such a shielding-- were it to have existed-- to state the undeniable truth that there is a double standard to the extreme between the consequences to a "conservative" and those to a "liberal". We see this daily.

But again, I am not trying to make that point, as in my mind it would not excuse the one person's bad act to point to another's. I only meant to address the plea as entered, and leave the rest to a Person Who knows all the facts.

There is good information regarding this situation that you won't find in any if the mainstream media stories at www.justiceforbishopfinn.com.

"Divine Providence, in its own good time, will defend the innocent " - Don Bosco

On your list of episcopal scalps, you should add one more: The Bishop of Ciudad del Este, Paraguay, Rogelio Livieres Plano - who by the way had more vocations than the rest of the dioceses on Paraguay put together.