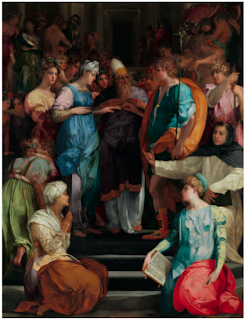 Though no one there asked me to, I am hereby officially signing on to Rorate Caeli's editorial about the Catholic response to legalized habitual sodomy and its threat to religion and culture, posted today.

I agree with it in full, and will add that not only must Catholic prelates speak out against this, but all of us must.  We cannot be silenced by a public policy that can only be characterized as unnatural and diabolical.

That being said, of course the hierarchy of the Church has the ability to speak for the Church as no layman can.  So why not do it already?  Late, very late, even too late, is still better than never.  So far, the Vatican's response to the Obergefell decision can be read here.  (Don't worry, the link is working properly.  Open your mind.).

As stated I agree with the editorial in its entirety.  After taking the particularly abysmal statement of Abp. Cupich to task, Rorate continues with the generally applicable portion, which I will repost below:

It's time for Catholic prelates to speak as true Catholics

By putting the bulk of their efforts into lecturing the Catholic faithful about the need to be "welcoming," "respectful," "charitable" and "kind" towards the homosexual lobby, not a few prelates and clerics play right into the homosexual playbook. It is even more heart-rending that many "conservative" and "traditionalist" clerics, perhaps due to fear, are joining the bandwagon of niceness by distancing themselves from "harsh" Catholics, whose only "harshness" lies in using language that would have been mild and normal for Catholics until the 1960's.


By legitimizing the false homosexual narrative of "victimhood" by "harsh, uncharitable and cruel" Catholics and other Christians, they implicitly concede that the homosexuals have the right to define who is the victim and who is the oppressor. This will only make it harder, if not virtually impossible, for our brethren to continue standing up to the new "orthodoxy" that the American State now wishes to impose.


For the "gay lobby," any statement of Catholic orthodoxy is by definition "hateful" and "harsh." Any sign of opposition against their demands is a form of "bigotry" that must be dealt accordingly with increasingly stringent legal measures -- with the next most likely step being the stripping of tax exempt status for religious institutions.


The homosexual lobby will not be content with anything less than the full rejection of Catholic doctrine on sexuality and the acceptance of their beliefs as the new, fabulous orthodoxy. They will exploit any sign of weakness, any sign of surrender, as openings to press more and more outrageous demands, secure in the knowledge that our side has little real stomach left for a fight.


The reality is that in the past few decades, Catholics have rendered great respect to homosexuals and the followers of various erroneous if not perverse ideologies and doctrines, to the extent of sacrificing the militancy that the defense of the truth rightfully requires. If the Church had fought homosexual pseudo-marriage with half the militancy with which it used to resist godless ideologies only a few decades ago, not a single Western country with an appreciable number of Catholics would have legalized this perversity -- at least not without Catholics first daring genuine martyrdom in vast numbers.


And yet, faced by one defeat after another, the only solution that so many Catholic prelates -- including Pope Francis -- can see is to insist on avoiding "hurtful" and "offensive" language even more. In the infamous words of the Synod of 2015's Instrumentum Laboris #78, language that is "clear and inviting, open, which does not moralize, judge or control" is the demand of the Church, not just on the Church.


This is the language of a Church that refuses to fight, refuses to stand up for its Faithful, and that will sooner rather than later find itself thrust back into the catacombs. The Church will now be in the closet.
Posted by thetimman at 3:34 PM

"I agree with it in full, and will add that not only must Catholic prelates speak out against this, but all of us must. We cannot be silenced by a public policy that can only be characterized as unnatural and diabolical."

When can we expect to hear from the ICKSP or FSSP in regards to this? Looking at both websites there is nothing printed defending marriage or the teachings of the Catholic Church. Why must they be silent? We are in a time of great need and our Catholic priest and leaders need to speak up. Should not the Truth trump liturgical politics?

Timman - most "good" Catholics are unable (or unwilling, God knows) to grasp the extent to which the "hierarchy" is comprised of men who suffer from this same diabolical disorder that you wish them to renounce. It does not matter whether each one is unchaste in satisfying his proclivities, the problem is with the IDEOLOGY (and an ideology it most certainly is).

They are, almost to a man, completely beholden to the IDEOLOGY. The are weak, effete men. Name the Bishop, and I will tell you that he is of it (at best). He is completely comprised. I will not name names, but the list would include most of the trendy trad favorites. It was not possible for any of them to become a bishop unless he was at least tolerant of it, if not approving.

To expect them (or some of them) to make public statements that will soothe the "make believers" at Rorate Coeli for a brief moment is a waste of time. Many of the writers at Rorate are as unmanly as the bishops they decry. Blog rants are a waste of time.

God always raises the saints needed in a time of crisis. These saints typically do not come from the expected sources. Perhaps some of these are already speaking today or have been speaking for some time, but they are drowned out by the BIG LIE. Perhaps the greatest of these saints has yet to appear. God knows. One thing is almost all but certain: it will not come from a "hierarchy" that is incapable of turning on its own fellow ideologues.

We are witnessing the bitter fruits of a long process. The BIG LIE rules.

Blaise, I hear the truth of marriage proclaimed from the pulpit at my ICRSS apostolate. I have every confidence in their orthodoxy. Their job is not to issue press releases but to help save souls in their charge. There is no ICRSS or FSSP bishop, so no broader authority than to lead parishes and oratories, which they do very well. I would focus on the problem areas and not on the solution areas.

Be thankful for our good priests while we have them. It may not be long.

Some prelates have been at the forefront of the marriage debate for a long time. Archbishop Salvatore Cordileone of San Francisco, who will be ordaining deacons and subdeacons for the Institute this week, has been a tireless and courageous champion of marriage in San Francisco, and before that in Oakland when he was the bishop here. We in the California Institute apostolates have been very glad of his leadership. Please pray for him as well as for the whole Institute, especially during the Ordination Week that started today.

Apparently the sermon at the Institute's Oratory in Kansas City this past Sunday was a fiery defense of traditional marriage and a scathing criticism of the Scotus decision...I wasn't there but I have friends who were and they told me about it. The ICKSP does do their job...

Is there any way to see a copy of that defense/critism? I would love to read it!!