Red Flag Taki Trio: History is an Inconvient Truth That Must be Flushed and Its Memory Sanitized 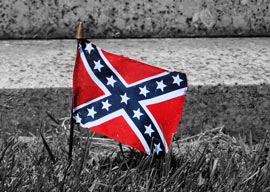 In all of the brouhaha over the Confederate Battle Flag-- its further vilification in light of the Charleston shooting, its ability to make politicians unite, its utter horribleness, its memory-hole trajectory-- is it not easy to notice yet again that we are played for suckers?

To highlight this, I am going to excerpt three articles from three different authors within the conservative/Christian/libertarian spectrum (which, despite some problems, remains the only spectrum of American political thought worthy of the term "thought") that all appear on the spunky and funky Taki's Magazine site.  A warning to you, dear modern readers: you might find some parts of the articles of one or the other of these men offensive, especially if you are the product of public education.

“Take Down a Symbol of Hatred,” rails The New York Times.

But the battle flag is not so much a symbol of hatred as it is an object of hatred, a target of hatred. It evokes a hatred of the visceral sort that we see manifest in Jenkins’ equating of the South of Washington, Jefferson, John Calhoun, Andrew Jackson and Lee with Hitler’s Third Reich.

What the flag symbolizes for the millions who revere, cherish or love it, however, is the heroism of those who fought and died under it. That flag flew over battlefields, not over slave quarters.

Hence, who are the real haters here?

Can the Times really believe that all those coffee cups and baseball caps and T-shirts and sweaters and flag decals on car and truck bumpers are declarations that the owners hate black people? Does the Times believe Southern folks fly the battle flag in their yards because they want slavery back?

The Times’ editorialists cannot be such fools.

Vilification of that battle flag and the Confederacy is part of the cultural revolution in America that flowered half a century ago. Among its goals was the demoralization of the American people by demonizing their past and poisoning their belief in their own history.

The world is turned upside down. The new dogma of the cultural Marxists: Columbus was a genocidal racist. Three of our Founding Fathers—Washington, Jefferson, Madison—were slaveowners. Andrew Jackson was an ethnic cleanser of Indians. The great Confederate generals—- Lee, Jackson, Forrest—fought to preserve an evil institution. You have nothing to be proud of and much to be ashamed of if your ancestors fought for the South. And, oh yes, your battle flag is the moral equivalent of a Nazi swastika.

And how is the Republican Party standing up to this cultural lynch mob? Retreating and running as fast as possible.

If we are to preserve our republic, future generations are going to need what that battle flag truly stands for: pride in our history and defiance in the face of the arrogance of power.


Next, from Southern man Jim Goad:

Would it be “racist” of me to suspect that ever since the War Between the States, every political move designed to protect the “oppressed” was also designed to enhance federal power? Is it paranoid to ponder whether under all the nonsense we hear about civil rights and hate crimes and terrorism are convenient covers for what is essentially a bald----, butt-naked power grab?

Dylann Roof should be tried for murder, and that’s it. Any attempts to criminalize his thought processes during the course of the alleged murders are by their very nature totalitarian.

But apparently nine counts of murder aren’t enough for some people. And apparently even a “hate crime” enhancement—which isn’t a separate charge, merely a recommendation for a longer sentence if “hate” was somehow involved in the crime—isn’t sufficient for them. They’re clamoring for the feds to take it to the hoop and also charge Roof with domestic terrorism.

I wrote long ago that I suspected all rhetoric and laws against “hate speech” and “hate crimes” were designed to ultimately block all criticism of the government. Nothing has happened in the interim to dissuade me from this suspicion.

I don’t generally like to make predictions, but I sense a gradual phasing out of the term “hate crime” in favor of “domestic terrorism.” Any criticism of nonwhites OR the government, no matter how intrinsically nonthreatening, will eventually all be lumped together as terrorist threats. The very idea of domestic terrorism provides huge growth opportunities for the federal government—opportunities it’d be foolish not to seize. And the feds are no fools, at least not like the rest of us are.


The American flag is a symbol of Native American genocide. We need to take it down. While you’re at it, take down the Union Jack. It symbolizes 700 years of war against Scotland. The Kiss logo has an SS that looks like Hitler’s SS. That’s offensive to all the Holocaust survivors in the audience. The Young Turks is offensive to the 1.5 Armenian Christians they murdered. They need to #ChangeTheName. I’m offended when rednecks call themselves rednecks because the term comes from Scotch-Irish slaves who couldn’t handle the Southern heat. That word should be as illegal as “kaffir” is in South Africa. White people themselves are a symbol of hatred and oppression, which is why I’ve begun a social media campaign called #TakeUsDown where white people post pictures of themselves facedown on the pavement. Anything that anyone deems offensive should be taken down immediately. Except, of course, for depictions of Mao or Stalin. They may have collectively killed more than 100 million people, but they did it for the greater good so it’s cool. Also, if a massacre killed rich people, it’s funny.

Just kidding. Going back over history and taking out the naughty bits is about as un-American as it gets. Yet here we are. South Carolina may be taking down the Confederate flag from its “perch in front of the State House” at the end of the month. Alabama removed the Confederate flag from capitol grounds on Wednesday. Mississippi is talking about removing the Confederate emblem from its flag, while Virginia and Maryland will be taking it off their license plates. Apple is removing App Store games with the Confederate flag. Walmart, eBay, Sears, Target, Etsy, and Amazon have banned it too (rumor has it Amazon was instructed by the government to do so). All this because a lunatic shot up a church.

Taki's mag is great. We had a nun who loved Taki's mag. Needless to say, she didn't last long.