Just a Little "End of the World" Commentary 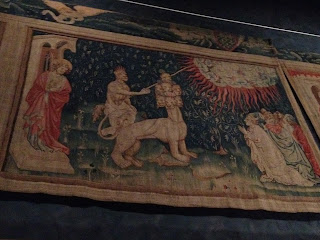 I like posts that talk about the end of the world.  Use the word "apocalypse" in a link and I will click.

That being said, we are certainly at the end of the world, in some sense at least.  Possibly, of course, the actual end of the actual world (Do you go to confession regularly?).

But certainly we are near the end of the world we know, as Americans and/or Catholics who were brought up thinking we were in a certain paradigm.  That paradigm, if it really even existed as we thought, is definitively crumbling. What takes its place, we can't know, but it sure doesn't look good.

The country that had historically taught its citizens (rightly or wrongly) that it was the best hope for freedom and justice on this guilty earth, has become a bureaucratic tyranny.  To wit:  Government-enforced medical "care" that requires funding of abortion, sterilization, and contraception-- and that gives government panels the right to decide if you live or die.  Government-enforced lunacy that requires citizens to call formalized, serial sodomy "marriage", and gives sodomites power to brainwash children, through allowing adoption and also through a Stalinist propaganda-style "education" regime.

As Isaias prophesied, "The effeminate shall rule over them."  People, this is undeniably true, and the scriptures speak of it as a punishment.  Rainbow flag that.

As an aside, the unbridled hubris and hatred of that crowd, adopting the rainbow-- the sign of God's covenant with man to spare him destruction by water--  as their banner just makes me spit.  But, as God always wins, and even His enemies unwittingly proclaim His Glory, note this:  Sodom was destroyed by fire from the sky.  The rainbow is a sign of the covenant that God will never again destroy man by flood.  Do the math.  I like to look at the rainbow flag as a sign of just how the destruction of the reign of sodomy does come about.

Don't get me wrong.  It won't be pleasant for anyone, good or bad, to stand under that rain.  Didn't Our Lady warn us about this at Akita?  We know this-- and suspect there may be something about it in the messages we have been prevented from hearing at Fatima.

Our bishops are outraged at Donald Trump about his pro-abortion statements in the past, um about his past statements in favor of "gay marriage" um, about his hair, um what?,  about his remarks on immigration.  Really?  Just when you thought he could not rouse from his chair to do anything except chuckle heartily, the Grand Marshall of the gay parade and Obama Dinner Host gets all upset about Trump.  Whatever the prudential application of Catholic teaching should be on these topics generally, it is certainly rich that the only times we hear from the hierarchy in a vigorous way is on junk science and immigration.

These topics, you know, are vehicles that the government can use against us to take our money and property.  Forced health insurance is a tax, said Chief Justice John Roberts.  Global warming requires a global tax, implies the Pope.

"The power to tax is the power to destroy," said Chief Justice John Marshall.

This is the policy of every Western nation, the community of nations, and unfortunately, the Church's leaders.

Wait, no, I'm sure it will all end well.

Rereading this, it sure sounds gloomy. I was just trying to be realistic.  But I would like to end on a "bright", as they say in the local news business.  So remember this, too:

[1] And he shewed me a river of water of life, clear as crystal, proceeding from the throne of God and of the Lamb. [2] In the midst of the street thereof, and on both sides of the river, was the tree of life, bearing twelve fruits, yielding its fruits every month, and the leaves of the tree were for the healing of the nations. [3] And there shall be no curse any more; but the throne of God and of the Lamb shall be in it, and his servants shall serve him. [4] And they shall see his face: and his name shall be on their foreheads. [5] And night shall be no more: and they shall not need the light of the lamp, nor the light of the sun, because the Lord God shall enlighten them, and they shall reign for ever and ever. 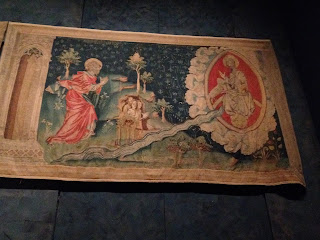 A post on chastisement without a 2017 reference? You're slipping' Timman.

In all seriousness, if anyone who reads this hasn't cashed out of stocks and bonds by 2017 (I'm still riding the Fed, thank you), then prepare to be shnockered. The market and business cycles are already old--they'll be ancient by 2017.

So other than prayer, confession, liquidating inflated assets, storing food in the basement, I don't how else to prepare for a possible chastisement.

Stunning to see we actually have a pope who embraces, promotes and helps two of the biggest mortal and perpetual enemies of the Church and God - liberalism and Communism. Francis is establishing his Church of Man.

With his archdiocese crumbling all around him, churches closing and scandal upon scandal, and the worst possible rate of priestly vocations, Cardinal Dolan begins his annual report (Catholic New York, July 23, 2015, p.15) saying:
"The Archdiocese of New York is joyful, alive, and growing." ! ! !

Will He find faith on earth when He comes again? Uh, oh...no so much.