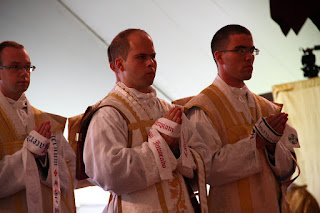 Congratulations to Long-Skirts, the sometime commenter poet, whose son was ordained to the priesthood this July.  She wrote several poems on the occasion, which you can read at her site.  This one spoke to me.  It concerns the maniturgium, which is used to bind the ordinands hands during the rite.* In the photo taken from her site, her son is on the right, I believe.

Linen-wrapped hands
Cloth-wrapped in tomb
First signs of life
Wrapped in the womb.

Fingers anointed
Then set free
As from her womb then tomb
For thee.

The Bread of Angels
From His wheat
Seeds sown deep
In loam and peat.

The maniturgia,
Now tucked away
To wait for mother’s
Deathly day

When in my coffin,
Hopefully shrived,
My linen-wrapped hands
When I have died

Will reach out begging,
Though I am least,
Lord have mercy
My son’s a Priest!!

MANITURGIUM: A fine linen cloth, often embroidered with fine lace or some insignia, used by a newly ordained priest after annointing with holy oils. ... This Maniturgium is then put aside by the priest to be used to place in the hands of his deceased mother before burial. (The Church Visible by James-Charles Noonan, Jr.)

Posted by thetimman at 4:38 PM

Oh, thank you Timman, you are too kind. Yes, that is our son on the right, Fr. "Long-Skirts" ummmmmm... no, no, Fr. Flanery and he was ordained in June after 7 long years of study.

The Maniturgia was made by his sister, Sr. Mary Bernard, or as her nephews & nieces call her, "Sr. Mary Bernary" because they can't pronounce "Bernard". She is a Traditional Franciscan.

There are hardly words when one's son is ordained but now I know what to wear in my coffin...most of us women have the hardest time accessorizing when it comes to dressing up but now I have my own ~`coffin accessory ~ and all I have to do is make sure I have the right dress/skirt to match...oh, God is so good!!

I am going to have him say a Mass for you and all your readers' intentions tomorrow at the 7:30 a.m. Mass! Pinch my toes and call me a jelly donut, it just doesn't get any better than that!!!

This is a fearful place
This is an awesome place
A Christian ground
To bear our race.

This is a fearful place
This is an awesome place
A Christian fort
The enemy, face.

Before a game
Before a class
Rosary said
On beads of brass.

Before Confession
They examine
Gorge on grace
Gainst sin-fed famine.

This is a fearful place
This is an awesome place
A tower of ivory
Their garrison, base.

And upon the pitch
“Push back the age
As hard as it pushes against you”
Rage!

This Christian ground
This fort, this tower
Fearful, awesome…
It’s now your hour!!

How beautiful! It certainly does not get any better than that...
Thank you for sharing. Four more years to go for our family. May Our Lord give our son the graces and perseverance needed!