Meatless Friday Thursday: My Heart's in the Highlands Edition 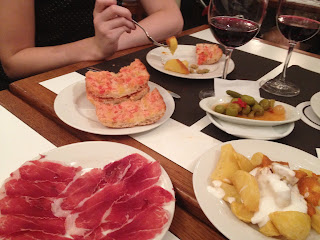 In my third year of law school, my Future Interests and Estate Planning professor, a true master in the Socratic method, began the semester with an assignment to read one case, comprising two-thirds of one page of text.  As most classes had daily reading of more than fifty pages each, this caught my attention.

The first day of class, he pried open the lessons of this simple case.  No new assignment given.  Day two, same thing.  Then day three, and so on, until we had spent three weeks of three classes each on this one case.  And it was utterly fascinating, without repetition or wasted time.  My favorite class.

Now, along the same lines, I've been thinking that I could teach a semester-long, three credit-hour, college-level humanities course on Bob Dylan's Highlands.  Well, at least I could warp young minds at a Catholic high school co-op with such a course.

Highlands, over the years, has grown on me, grown on my mind, to the extent that I think it may be (outside of the ancient Liturgy) the best modern expression of man's longing for heaven.  Highlands has everything: theology, philosophy, politics, meditation, irony, humor, rhetoric, and poetry.

The song is based on a simple (E blues) riff, inspired, according to Dylan, by an unnamed Charley Patton record that has yet to be identified. The riff is played the whole way through the song. The song has no traditional chorus or bridge.


St. Paul refers to the soul's prayer of an inexpressible groaning (insert Dylan voice joke here).  Plato speaks of Forms.  They're both right here.  You don't like Dylan?  You don't understand.

Enjoy this song.  Crank it up.  Drink a bourbon while you do:

I don’t want nothing from anyone, ain’t that much to take
Wouldn’t know the difference between a real blonde and a fake
Feel like a prisoner in a world of mystery
I wish someone would come
And push back the clock for me

I’m listening to Neil Young, I gotta turn up the sound
Someone’s always yelling turn it down
Feel like I’m drifting
Drifting from scene to scene
I’m wondering what in the devil could it all possibly mean?

Insanity is smashing up against my soul
You can say I was on anything but a roll
If I had a conscience, well, I just might blow my top
What would I do with it anyway
Maybe take it to the pawn shop

I’m in Boston town, in some restaurant
I got no idea what I want
Well, maybe I do but I’m just really not sure
Waitress comes over
Nobody in the place but me and her

It must be a holiday, there’s nobody around
She studies me closely as I sit down
She got a pretty face and long white shiny legs
I say, “Tell me what I want”
She says, “You probably want hard boiled eggs”

I say, "That's right, bring me some"
She says, "We ain't got any, you picked the wrong time to come”
Then she says, “I know you’re an artist, draw a picture of me!”
I say, “I would if I could, but
I don’t do sketches from memory”

She pulls one out from behind her ear
She says, “All right now, go ahead, draw me, I’m standing right here”
I make a few lines and I show it for her to see
Well she takes the napkin and throws it back
And says, “That don’t look a thing like me!”

I said, “Oh, kind Miss, it most certainly does”
She says, “You must be jokin’.” I say, “I wish I was!”
Then she says, “You don’t read women authors, do you?”
Least that’s what I think I hear her say
“Well,” I say, “how would you know and what would it matter anyway?”

“Well,” she says, “you just don’t seem like you do!”
I said, “You’re way wrong”
She says, “Which ones have you read then?” I say, “I read Erica Jong!”
She goes away for a minute
And I slide up out of my chair
I step outside back to the busy street but nobody’s going anywhere

Every day is the same thing out the door
Feel further away than ever before
Some things in life, it gets too late to learn
Well, I’m lost somewhere
I must have made a few bad turns

I see people in the park forgetting their troubles and woes
They’re drinking and dancing, wearing bright-colored clothes
All the young men with their young women looking so good
Well, I’d trade places with any of them
In a minute, if I could

Well, my heart’s in the Highlands at the break of day
Over the hills and far away
There’s a way to get there and I’ll figure it out somehow
But I’m already there in my mind
And that’s good enough for now


What is your Highlands?

Posted by thetimman at 4:12 PM

It's no "O Beautiful Gaia"