To Place Ourselves Unreservedly in the Hands of God 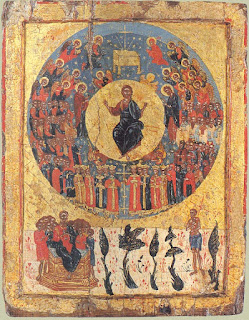 
Again the priest read out the answer. "'Yes and no. The news is true. It will be enforced immediately. Unless a step is taken immediately there will be widespread and final apostasy.'"


"Very good," murmured the Pope, in his official voice. "Now listen carefully, Eminence." He was silent for a moment, his fingers joined beneath his chin as just now at mass. Then he spoke.


"We are about to place ourselves unreservedly in the hands of God. Human prudence must no longer restrain us. We command you then, using all discretion that is possible, to communicate these wishes of ours to the following persons under the strictest secrecy, and to no others whatsoever. And for this service you are to employ messengers, taken from the Order of Christ Crucified, two for each message, which is not to be committed to writing in any form. The members of the Sacred College, numbering twelve; the metropolitans and Patriarchs through the entire world, numbering twenty-two; the Generals of the Religious Orders: the Society of Jesus, the Friars, the Monks Ordinary, and the Monks Contemplative four. These persons, thirty-eight in number, with the chaplain of your Eminence, who shall act as notary, and my own who shall assist him, and Ourself—forty-one all told—these persons are to present themselves here at our palace of Nazareth not later than the Eve of Pentecost. We feel Ourselves unwilling to decide the steps necessary to be taken with reference to the new decree, except we first hear the counsel of our advisers, and give them an opportunity of communicating freely one with another. These words, as we have spoken them, are to be forwarded to all those persons whom we have named; and your Eminence will further inform them that our deliberations will not occupy more than four days.


"As regards the questions of provisioning the council and all matters of that kind, your Eminence will dispatch to-day the chaplain of whom we have spoken, who with my own chaplain will at once set about preparations, and your Eminence will yourself follow, appointing Father Marabout to act in your absence, not later than four days hence.


"Finally, to all who have asked explicit directions in the face of this new decree, communicate this one sentence, and no more.


"Lose not your confidence which hath a great reward. For yet a little while, and, He that is to come will come and will not delay.—Silvester the Bishop, Servant of the Servants of God."


After the two parts which I have already explained, at the left of Our Lady and a little above, we saw an Angel with a flaming sword in his left hand; flashing, it gave out flames that looked as though they would set the world on fire; but they died out in contact with the splendour that Our Lady radiated towards him from her right hand: pointing to the earth with his right hand, the Angel cried out in a loud voice: ‘Penance, Penance, Penance!'. And we saw in an immense light that is God: ‘something similar to how people appear in a mirror when they pass in front of it' a Bishop dressed in White ‘we had the impression that it was the Holy Father'. Other Bishops, Priests, men and women Religious going up a steep mountain, at the top of which there was a big Cross of rough-hewn trunks as of a cork-tree with the bark; before reaching there the Holy Father passed through a big city half in ruins and half trembling with halting step, afflicted with pain and sorrow, he prayed for the souls of the corpses he met on his way; having reached the top of the mountain, on his knees at the foot of the big Cross he was killed by a group of soldiers who fired bullets and arrows at him, and in the same way there died one after another the other Bishops, Priests, men and women Religious, and various lay people of different ranks and positions. Beneath the two arms of the Cross there were two Angels each with a crystal aspersorium in his hand, in which they gathered up the blood of the Martyrs and with it sprinkled the souls that were making their way to God.


--Published version of the Third Secret of Fatima, written by Sr. Lucia in Tuy, 1944.
Posted by thetimman at 2:11 PM