"I trust that, by God's help, I may spread the Holy Name and Gospel of Jesus Christ as widely as may be." 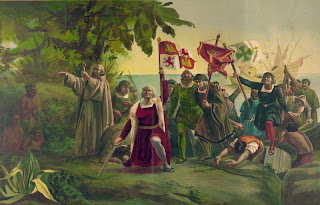 Statements of the Pope on the Anniversary of Columbus' discovery of America:

QUARTO ABEUNTE SAECULO
ENCYCLICAL OF POPE LEO XIII ON
THE COLUMBUS QUADRICENTENNIAL
To Our Venerable Brethren, the Archbishops and
Bishops of Spain, Italy, and the two Americas.

Now that four centuries have sped since a Ligurian first, under God's guidance, touched shores unknown beyond the Atlantic, the whole world is eager to celebrate the memory of the event, and glorify its author. Nor could a worthier reason be found where through zeal should be kindled. For the exploit is in itself the highest and grandest which any age has ever seen accomplished by man; and he who achieved it, for the greatness of his mind and heart, can be compared to but few in the history of humanity. By his toil another world emerged from the unsearched bosom of the ocean: hundreds of thousands of mortals have, from a state of blindness, been raised to the common level of the human race, reclaimed from savagery to gentleness and humanity; and, greatest of all, by the acquisition of those blessings of which Jesus Christ is the author, they have been recalled from destruction to eternal life. Europe, indeed, overpowered at the time by the novelty and strangeness of the discovery, presently came to recognize what was due to Columbus, when, through the numerous colonies shipped to America, through the constant intercourse and interchange of business and the ocean-trade, an incredible addition was made to our knowledge of nature, and to the commonwealth; whilst at the same time the prestige of the European name was marvellously increased. Therefore, amidst so lavish a display of honour, so unanimous a tribute of congratulations, it is fitting that the Church should not be altogether silent; since she, by custom and precedent, willingly approves and endeavours to forward whatsoever she see, and wherever she see it, that is honourable and praiseworthy. It is true she reserves her special and greatest honours for virtues that most signally proclaim a high morality, for these are directly associated with the salvation of souls; but she does not, therefore, despise or lightly estimate virtues of other kinds. On the contrary, she has ever highly favoured and held in honour those who have deserved well of men in civil society, and have thus attained a lasting name among posterity. For God, indeed, is especially wonderful in his Saints - mirabilis in Sanctis suis; but the impress of His Divine virtue also appears in those who shine with excellent power of mind and spirit, since high intellect and greatness of spirit can be the property of men only through their parent and creator, God.

2. But there is, besides, another reason, a unique one, why We consider that this immortal achievement should be recalled by Us with memorial words. For Columbus is ours; since if a little consideration be given to the particular reason of his design in exploring the mare tenebrosum, and also the manner in which he endeavoured to execute the design, it is indubitable that the Catholic faith was the strongest motive for the inception and prosecution of the design; so that for this reason also the whole human race owes not a little to the Church.

4. ... For when he first petitioned Ferdinand and Isabella, the Sovereigns of Spain, for fear lest they should be reluctant to encourage the undertaking, he clearly explained its object: "That their glory would grow to immortality, if they resolved to carry the name and doctrine of Jesus Christ into regions so distant." And in no long time having obtained his desires, he bears witness: "That he implores of God that, through His Divine aid and grace, the Sovereigns may continue steadfast in their desire to fill these new missionary shores with the truths of the Gospel." He hastens to seek missionaries from Pope Alexander VI, through a letter in which this sentence occurs: "I trust that, by God's help, I may spread the Holy Name and Gospel of Jesus Christ as widely as may be." He was carried away, as we think, with joy, when on his first return from the Indies he wrote to Raphael Sanchez: "That to God should be rendered immortal thanks, Who had brought his labours such prosperous issues; that Jesus Christ rejoices and triumphs on earth no less than in Heaven, at the approaching salvation of nations innumerable, who were before hastening to destruction." And if he moved Ferdinand and Isabella to decree that only Catholic Christians should be suffered to approach the New World and trade with the natives, he brought forward as reason, "that he sought nothing from his enterprise and endeavour but the increase and glory of the Christian religion." And this was well known to Isabella, who better than any had understood the great man's mind; indeed it is evident that it had been clearly laid before that most pious, masculine-minded, and great-souled woman. For she had declared of Columbus that he would boldly thrust himself upon the vast ocean, "to achieve a most signal thing, for the sake of the Divine glory." And to Columbus himself, on his second return, she writes: "That the expenses she had incurred, and was about to incur, for the Indian expeditions, had been well bestowed; for thence would ensure a spreading of Catholicism,"

5. In truth, except for a Divine cause, whence was he to draw constancy and strength of mind to bear those sufferings which to the last he was obliged to endure? We allude to the adverse opinions of the learned, the rebuffs of the great, the storms of a raging ocean, and those assiduous vigils by which he more than once lost the use of his sight. Then in addition were fights with savages, the infidelity of friends and companions, criminal conspiracies, the perfidy of the envious, and the calumnies of detractors. He must needs have succumbed under labours so vast and overwhelming if he had not been sustained by the consciousness of a nobler aim, which he knew would bring much glory to the Christian name, and salvation to an infinite multitude. And in contrast with his achievement the circumstances of the time show with wonderful effect. Columbus threw open America at the time when a great storm was about to break over the Church. As far, therefore, as it is lawful for man to divine from events the ways of Divine Providence, he seemed to have truly been born, by a singular provision of God, to remedy those losses which were awaiting the Catholic Church on the side of Europe.

9. We decree, therefore, that on October 12, or on the following Sunday, if the Ordinary should prefer it, in all the Cathedral churches and convent chapels throughout Spain, Italy, and the two Americas, after the office of the day there shall be celebrated a Solemn Mass of the Most Holy Trinity. Moreover, besides the above mentioned countries, We feel assured that the other nations, prompted to it by the counsel of their bishops will likewise join in the celebration, since it is fitting that an event from which all have derived benefit should be piously and gratefully commemorated by all.