Dilbert Analyzes the Political Race, and Rather Well at That 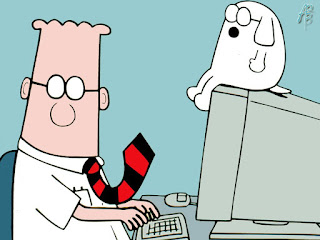 You may have noticed I have at long last linked Scott Adams, the creator of Dilbert, on the blogroll at right.  In addition to a daily cartoon strip, his blog usually has some trenchant view on modernity. Today, he surveys the Trump Train v. Wicked Witch of the West matchup.  Nevertrump-ers might want to look away-- I suspect they can't handle that their position has always been a bit foolish.

I have opined to anyone who will listen (7 people and dwindling...) that Trump would bury Clinton in an electoral landslide, subject to my usual admonition that it may not matter at all, as Hillary's emails probably contain confirmation that someone already pre-programmed the voting machines. And, as one more piece of crackpottery for long-time readers, I will just predict right now that the Democrat party nominee will likely be....

Evaluating the Political Chess Board

Trump has pulled ahead of Clinton nationally in both the new FOX poll and the Rasmussen Poll. And Trump passed Clinton in favorability according to the newest national poll on that topic. The Megyn Kelly interview (including the hyping of it ahead of time) marked Trump’s third-act turn.

Meanwhile, Clinton is losing one primary after another to a dehydrated dandelion in her own party. That doesn’t bode well for the coming cage fight with Godzilla.

And Godzilla hasn’t even started to punch hard. He’s still looking at the opposition research and humming. So that’s coming.

The New York Times did its best to make Trump look like a sexist, but they only succeeded in destroyed their own credibility when their star witness outed them for making up stuff.

Clinton’s team continues to churn out anti-Trump hit pieces that ask you to imagine President Trump in office. By November, voters will think Trump has been running the country for a year and it looked a lot like the Obama administration. That’s called “graduated exposure” and it’s a well-understood psychological phenomenon. The Democrats are working overtime to make Trump feel less scary while believing they are doing the opposite.

Now imagine Clinton and Trump selecting VPs. If Clinton picks a woman, she overplays the woman card to destruction. If she selects a beta male, it will seem cringeworthy to the sexist public. If she selects an alpha male it will annoy her base without gaining a single vote. Clinton loses on every path.

Meanwhile, Trump can pick a man or a woman and it will look natural. No VP will overshadow Trump’s energy. All he needs is a running mate that is competent and a little bit interesting.

A jet on the way from France to Egypt has disappeared, and terrorism is the assumed reason. That plays to Trump’s strength, as does every act of terror everywhere.

Trump has gone a few weeks without creating any new provocations on the scale of his 2015 self. The longer he proves he can moderate his behavior to fit the situation – as he did in the Megyn Kelly interview – the more people trust that he isn’t crazy.

Trump’s insults are now understood to be more than random hate. They are weapons-grade persuasion that have been engineered and then A-B tested at rallies. The “Crooked Hillary” harpoon is already doing its damage. If history is our guide, the nickname will bleed her out before November.

Paul Manafort, Trump’s campaign manager, knows how to win. The Clinton campaign doesn’t show the same level of talent, at least in terms of persuasion. Clinton’s logo (the big H) looks like a hospital sign. And their “Love Trumps Hate” slogan is two-thirds “Love Trump.” Any trained persuader knows people put more cognitive weight on the first part of sentences.

I’m teeming with confirmation bias, but from my kitchen counter, I don’t see how it can go any direction but a Trump landslide from here.

I’ll remind readers that I have disavowed all of the candidates. My political views don’t line up with any of them. My interest is in Trump’s persuasion skills.
Posted by thetimman at 10:22 AM

Email ThisBlogThis!Share to TwitterShare to FacebookShare to Pinterest
Labels: "I would probably sue Rosie, because it would be fun. Rosie is a loser.", Secular News

There's none better at this than Scott Adams. And he predicted back in *August* that Trump would win the Presidency "by one of the biggest margins in history".

And, no, Trump is not as pious as you are. But he's better at being president than you are. And he understands that you are getting hammered by political correctness out of existence, ... and has the skill and the cojones to do something about it.....

Your post reminds me of the stories of people criticizing Gen Grant b/c he drank too much.

Lincoln's answer was "He fights."

Same for Trump. He fights.

What the heck does "Love Trumps Hate" even mean??? Does that mean that loving Trump trumps hate? That has to be the worst branding I have ever heard - first, it is not even clear if that is an endorsement or rejection of Trump. Second, you don't use your opponent's name in YOUR OWN tag line. It gives him exposure, and is essentially an admission that you are playing catch up, recognizing he is the "one to beat." Happens all the time in car commercials - "we are better than Toyota" - notice how many car companies try to show how much better they are than Toyota. No wonder Toyota is the best selling car in America - they have all crowned it the measure of all others.

Fourth, the Hildebeast is the coldest, least likable human being on the planet - how is she going to pull off a warm fuzzie "Love" image - seriously??? It could have worked for Bill, but not his total polar opposite.

I resent the Hildebeast being referred to as the "Wicked Witch of the West." She's from the East.