I Try to Analyze These Things Like a Lawyer Would 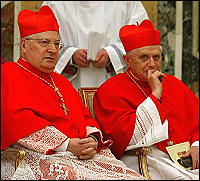 Last week witnessed the brouhaha surrounding the report at OnePeter5 that Pope Benedict XVI (the still-living Bishop of Rome, wearing white, still bearing the title of Pope, residing in Rome-- remember him?) admitted that the full Third Secret of Fatima has not yet been released.  Opposed to this idea, in addition to the usual suspects in the liberal "Catholic" media and their cuckservative counterparts in the blogosphere, was, notably and surprisingly, Rorate Caeli.

I have no inside information in the Vatican, obviously.  So, the sourcing of the alleged statements, both from OnePeter5 and Vatican Radio, I cannot properly evaluate.  Yes, I mentioned the Vatican Radio report when I said "alleged" statements.

The 1P5 report was based upon hearsay, in that the words of Pope Benedict are attested to by a third party-- a priest in the trust of the blog's author, Steve Skojec.  The report may be accurate or not, I'm just mentioning the hearsay nature of the source.  So, that weighs the scales in favor of Vatican Radio, yes?

No.  The Vatican Radio report is also hearsay, and in fact we have no information on the person reporting Pope Benedict's words, or how they were obtained. All we have is the assurance of the communique from the Holy See press office that Pope Benedict said them.

As an aside, I don't trust the veracity of Vatican Radio on the subject of Fatima, as if there has been a cover-up of the Third Secret (as there has undoubtedly been; open-minded skeptics can begin reading here), this is the type of release we would expect. And in this pontificate my trust level has gone way down. I have a high regard for Mr. Skojec's work, but to be fair I cannot analyze his report based upon the source either.

As a result, let me just analyze the alleged statement from Pope Benedict as related by the official communique:

“Several articles have appeared recently, including declarations attributed to Professor Ingo Dollinger according to which Cardinal Ratzinger, after the publication of the Third Secret of Fatima (which took place in June 2000), had confided to him that the publication was not complete.

“In this regard, Pope emeritus Benedict XVI declares ‘never to have spoken with Professor Dollinger about Fatima’, clearly affirming that the remarks attributed to Professor Dollinger on the matter ‘are pure inventions, absolutely untrue’, and he confirms decisively that ‘the publication of the  Third Secret of Fatima is complete’.”

That's the communique in its entirety.  No signature from either bishop in white on this one, no foundation of when and where and with whom the alleged interview with Pope Benedict took place. But again, let's read the words used:

"... never to have spoken with Professor Dollinger about Fatima." That is a modifier with possible import. Obviously, the communique wishes to deny any conversation with Dollinger, but it doesn't take Bill Clinton to parse those words such that a conversation about something else (Vatican press procedures, the New Mass, Cardinal Sodano's personal hygiene, etc.) could have produced an opinion about the 2000 release on Fatima.  And if there is any defect of memory on the exact words attributed to Pope Benedict, as opposed to the point of message, one could technically call them "pure inventions, absolutely untrue."

Please don't think that I cannot comprehend that the intended message, and the first one that comes to mind, is that the entire conversation never happened and that the 1P5 report is untrue.  Got it.  I'm just saying, if there is a press office that wishes not to lie (maybe because Catholics shouldn't) and is employing a whopper of a mental reservation (which it might find justifiable) this is one way to do it. Note that one of the "absolutely untrue" statements from the source at 1P5 is that the vision released in 2000 (of the bishop in white whom "we took to be" the pope) was in fact authentic. Is the Vatican taking that back? I doubt that.

Recall that no matter what the reality is, by definition one of these bishops in white we have today IS NOT THE POPE. The obvious correlation with the Third Secret's vision released in 2000, when none of this could have been humanly contemplated, should put us on guard about the heady nature of these times.

One other way of parsing this, a notion made in the past, and discussed extensively by Antonio Socci, is that the entire Fatima secret semi-release and cover-up involves a large scale mental reservation, but in the end is true-- the vision, JPII's statements at Fulda and at the beatification ceremony of visionaries Francisco and Jacinta, the Marian apparition at Akita, and other Vatican press releases, taken together and in their entirety, have produced a full release of the Third Secret overall.

But timman, you are reading this too strictly, and are straining gnats while swallowing camels! I answer that God gave us brains for a reason, and no less an example than St. Thomas More argues for a careful reading of words, when words' meanings are important.

Well, that's my take. I have no way of verifying the 1P5 report, and I have no way of verifying the Vatican Radio report.  The record of the Vatican on Fatima has not been stellar.  You can make your own call. I have no doubt that the words of Our Lady surrounding the vision of the bishop in white have been hidden from us, and that we are all on the brink of learning what they were the hard way.

Our Lady of Fatima, pray for us.
Posted by thetimman at 8:54 AM

Email ThisBlogThis!Share to TwitterShare to FacebookShare to Pinterest
Labels: conspiracy theories, Our Lady

Interesting that Alice von Hildebrand's account was not refuted.

Boy, the Vatican jumped all over this IMMEDIATELY!! Since when do they work that fast?

There are a lot of Catholics-- I'm guessing you would call them liberals or something worse-- who sincerely believe that the Fatima story is just not true. I am one of them. Of course, you are free to believe that it is true. However, the gyrations you went through in this post reinforce my view that this is silliness run amuck.

It is interesting that both recent statements were not similarly denied. Similar to how I find it interesting how it is clear from the original statements on Fatima make it clear that Our Lady said something to the children during the vision since Lucia had to repeat it to Francisco (who could see everything, but couldn't hear Our Lady's words). We also have that tantalizing tag line "in Portugal, the dogma of the Faith will always be preserved, etc."

How on earth does that square with the official text.

It's also quite easy to see how mental reservation could very easily be used to cover such a situation for any number of reasons. Some quite possibly making it the right choice of action. I've always found it very, very, very odd, though.

"in Portugal, the dogma of the Faith will always be preserved, etc."

How on earth does that square with the official text.

How does that square with the current reality? Portugal seems no more faithful than any other country. Malta I might believe, but Portugal?

The whole Fatima secrets industry is not about to go away, no matter who says what about it.
Our penchant for predicting the future is an human trait. We find the future both fascinating and terrifying. I think that it is unfortunate that we are drawn more toward the "terrifying". The alleged apocalyptic future sounds good mainly because we do not think that it will harm us or our loved ones, but that the people that we do not like will be killed off. Justice perhaps, but with some revenge thrown in there.
I like Pope Benedict. I absolutely trust his knowledge about this. He is a prayerful man who has the good of mankind in his heart.
Try as he might, he will not make this go away.

Malachi Martin, Jesuit advisor at Vatican II, read the secret in its original Portuguese. He gave many clues to its contents in his writings before his death in 1999.