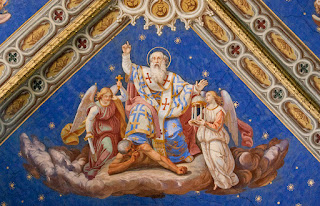 This position comes from simple common sense observation of its fruits, with an eye on reality. Focusing on validity merely obfuscates the central issue.  The practical suppression of the ancient Mass and the regime of novelty in liturgy has led to the devastation of the vineyard. Why?  Though the reasons are legion, the destruction of the liturgy has necessarily led to the destruction of sound doctrine. The novus ordo agendi leads to the loss of souls.


Because others write more goodly than I do, I want to call attention to this post by the irrepressible Hilary White.  The whole post needs to be read for context, so please read it.  But here are just a few excerpts:

...But it was inescapable: there was and is a vast cleavage in the Catholic Church that amounted to a de facto schism. A new and false religion was being produced, like the toxins from a bacterial infection that sickens the body, inside all the institutions of the Church, and hardly anyone had noticed. It was a hidden schism that had been nesting within the Catholic institution entirely uncorrected, since the close of Vatican II. Neo-modernism had succeeded in replacing authentic Catholic teaching to the point where to hold the doctrines of the Faith in certain areas and profess them out loud was enough to have you ostracized from this “conservative Catholic revival”. The New Modernism had, in fact, become the new conservatism.

Thirteen years is a long time and since then, particularly in the last three years, the false categories of this simplistic “conservative/liberal” narrative are rapidly becoming obsolete. The contradictions are finally becoming inescapable to a vast swathe of Catholics. And it didn’t start with Francis. John Paul II pushed along its long decline when he approved the use of female servers at Mass, and a great many of these “conservatives” in the Church (including Cardinal Ambrozic of Toronto btw,) who had been loudly calling for restoration of the norm were suddenly undermined by their darling “conservative” pope.

This blow to the carefully constructed public image of John Paul II as the “conservative” icon (thanks in large part to George Weigel’s bizarre pre-humous canonization) was a severe dent in their entire worldview and could not be encompassed. They took the only solution they could, and simply redefined orthodoxy to include whatever theological or disciplinary novelty a pope was willing to install. Papolatry or Papal Positivism, as we’ve started to call it, was born. The person of the pope, the man himself, became the new orthodoxy, a kind of semi-divine oracle who brings us either the old or the new doctrine, as the mood strikes, straight from the mouth of the “Spirit” whispering in his ear. “Altar girls” were fine, just fine, and anyone who continued to call for their abolition were extremists. Reactionaries! Rad Trads! Schismatics! etc…

The conservative capitulation in the altar girls battle was where most of the antipathy of the new conservatives towards Traditionalists began and that continues to escalate – with the brief Benedictine respite – to this day. A guilty conscience, I guess.

But slowly, the ground on which these “neoCatholics” stand was being chipped away, until the only metric left to them has been the Church’s teaching on sexual morality. As long as the pope continues to defend and uphold these, the narrative tells them, it doesn’t matter how many Korans he kisses. All that stuff is open to debate. Sex, marriage and babies is the bottom line. Except that this bottom line has been drawn in chalk on the false floor. And Francis has begun to erase it. The “conservative Catholic” position had been safe in this demarcation zone, at least until Amoris Laetitia.

It took a long time, a lot of reading, a lot of talking and thinking and visiting and learning to understand all this, but when I did, it was like being pulled out of the Matrix. The entire universe of Catholicism was, in reality, nothing at all like what I had thought. I realized that not only had I, somehow, come to a perspective in which all the puzzling pieces fit together to form a coherent, though horrifying, big picture, but that without this perspective it was going to be nearly impossible to convince anyone else. How do you tell people that things are, indeed, much worse than even their darkest imaginings and, more importantly, aren’t getting better? I figured we were going to need an act of God for that. (You can see where this is going, right?)

There are a lot of Trad-converts who would certainly rather not know what we know. It is damned uncomfortable, and it meant too that a great many doors were going to be closed to me forever – particularly vocational doors, which was very hard to bear. But that simply was where the evidence led. There was no way around it. Only the Real counts, even if it means you can’t ever, ever have the one thing you’ve wanted all your life. Even if it means you’re going to be going in a direction in life, and for the rest of your life, that you never, ever would have chosen for yourself. But it is why I and my Traditionalist friends are able to understand what is going on now.

The facade of unity, one that irritated me for years because of its obvious falsity, is finally falling irrevocably into ruins. Cardinal Muller is hardly being theologically controversial when he says that God’s mercy and His law are not opposed. But to do so, to state this simple truth of the Catholic faith, is now not only controversial, it is anathema. Because it is “against the pope.”

If Muller is “against the pope,” it is because the pope is against the Faith. The schism that we have been pretending did not exist, is finally becoming so evident, so many are falling into the gulf and hitting the rocky bottom, that it can no longer be wished away. Neo-Catholics are going to have to either revamp their ideology to conform with the new Franciscan paradigm – which will be fine, since their ideology is simply “the pope,” – or if they have retained a shred of Catholicity, they are going to have to start facing some uncomfortable facts about the condition of the Church. The middle ground on which they have been standing, rooted, since the 80s, is gone.
Posted by thetimman at 9:00 AM

For a long time, in fact until recently, when a modernist would proudly speak about the 'new church' and reject almost everything 'pre-conciliar', I would argue the point. No more. It is a 'new church': a protestantized church. And the result has been the loss of millions and millions of souls. The loss of holy priests, the loss of teaching and nursing sisters --to be replaced with cosmic modernists, abortion supporters, witches, and lesbians.

It is worse now with the present pontiff seeming to condone sinful situations and backed up by many in power now. The faithful cardinals and others are marginalized. And the sheep do not know which is the true sheepfold. It is a time of great trial and testing with many of even the elect led astray. The Lord Himself will have to work this out.

She hits the nail on the head. Her analogy of waking up from the matrix sounds so much like my own journey. It's like the church is just starting to wake up from a terrible hangover and a couple of fratboys and strippers still don't realize that the party's over and the cops are taking depositions. How do we help other Catholics sober up and see what is happening? Weirdly, I think that Amoris is brazen enough to start unnerving people and get them to ask the uncomfortable questions. It might take the heretical beliefs of a pope to get people to wake up.

You guys are living in a fantasy world. The fantasy is that you are the true Church and the other 97% of Catholics are outside the Church. The Truth is that if you continue on this path you will be in schism. Come back.

Sam, I profess the approved creeds, Apostles, Nicene and Athanasian. I submit to the Roman Pontiff. I hold to the faith as handed down, and worship as our forefathers did.

Wither schism? And who is in schism if there is one?

Sam-I encourage you to review in detail the history of the Arian heresy in the Church. In some places, more than 97% of the catholics were heretical, and accepted and professed the Arian heresy. Bishops who were heretics even hired mercenaries to kill true Catholics - and true Catholics wee murdered. The Arians were not only bloodthristy, they were cunning - even planning how they would use ambiguous words to make true Catholics think that they were not professing heresy. It ended with Jesus and His CHurch prevailing and the Arian heretics defeated, the heresy extirpated. I especially commend to you to review the details of the death of Arius himself. The Church, even if it is your 3% of true Catholics, will survive-it always does becasue Jesus always does; but as M Prodigal says, millions are lost. Sam, you are not lost because you are thinking about all this-keep on studying. And please make my "Prayer Deal" - I will pray for you and yours and you will pray for me and mine. God bless you and keep you and lead you on. Guy McClung, San Antonio TX