Integrist is Intended to Be an Insult; Here is Why I Embrace the Term 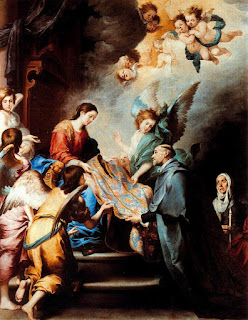 Steve Skojec gets it.  The Liturgy is the key to everything.

Well, as I've said before: even as a teenage atheist from a Protestant background, I noticed that when the Catholic Church shifted gears into the New Mass, she stumbled like a ballerina who'd been grazed by a sandbag in mid-pirouette. The perps and their assistants -- assistants both witting and unwitting -- have been working to finish her off ever since.

I know there are those who don't make that connection. "Correlation is not causation" seems to be their refrain. That also is the refrain of many who insist that the sudden embrace of contraception (by oh, just about everybody) is unconnected to the subsequent rapid enshrinement of no-fault divorce, fornication as normative behavior, and abortion on demand.

Just a coincidence, I'm sure.

It is not true. Give up your strange obsession and join your fellow Catholics in the mainstream.

So says Sam who objects to most orthodox moral teachings of the Church. Exhibit A for Skojec's case.

Heresy. Jesus said "When two are more are gathered in My name, there I am, in the midst of them." Up to a billion Catholics gathered together for the sacred liturgy this past year. Are you saying that their worship of God is invalid? That God Himself isn't there in His fullness? That the consecrated bread and wine are not Jesus's own flesh and blood?

The Holy Spirit came down upon the disciples of Christ on what we celebrate as Pentecost Sunday. Even though they were maybe uneducated locals, people from all over the world heard them "in their own languages." Interesting that they did not hear them ONLY in Latin.

Correlation is an interesting thing. It does not necessarily establish causation in a strict sense, but it can often be a predictor of things, or more accurately, a marker or identifier. Insurance companies base their bottom lines on it, much to their success. Similar to complaints about "slippery slope" arguments. Sure, they are not arguments in a strict logical sense such that if A then B must follow. But they are based upon historical observation and quite often accurately show that if A, then B is highly likely to follow.

Your comment is a bit over the top, Anonymous 9:38. If you accuse someone of heresy, you should produce some proof for your claims.

I don't think that Steve Skojec or timman are saying that the Mass of Paul VI is invalid. Nonetheless, there are quite a number of problems thar have arisen from it:there's probably never been a greater division between Roman Rite Catholics. And it has to be said that some Catholics that attend the Novus Ordo seem to have a visceral hatred for the Mass of all Times. This is a grave matter since it exhibits an attitude that is hostile to the traditions of the Church. Also,it still remains highly doubtful whether a Pope is permitted to simply create a new Mass. According to Msgr Gamber, the absolute absence of texts that would suggest this possibility speaks volumes.

Dear Konstantin,
Why are Catholics hating Catholics because their religious practices are different?
Yes, I love that Christ is present in BOTH the Novus Ordo AND the traditional Latin Mass. I totally understand that our understanding of who God is might be reflected in which style of Mass is said too. And that for some, God is quite transcendent, maybe highly judgmental and harsh, and our relationship with Him is mostly a personal one that demands adoration and piety. For others, God is quite immanent - right there within our community as we are gathered in HIS name. For some, God is more immanent, and can be found more in the way humans treat other humans by works of charity.
The bottom line is that this is NOT an "either/or" conundrum, but a "Both/And."

I love that this site celebrates God's presence in this form of worship. But it continues to be incredibly hypocritical to denounce that practices that differ need to be 'abolished?' Really?
I will start listening when this group goes into the heart of Africa and tells Catholics celebrating a three hour-long sacred Eucharist in the bush with singing and dancing that they are flat out wrong and their practices need to be abolished. That these poor Catholics, reminiscent of the first centuries of the church, need to cease and desist their wrong ways until they can build a gothic cathedral, bring in a pipe organ and kneelers, encourage a young man to become a priest, send him to Rome to learn Latin, and have him return to this village where the 'right' kind of church awaits him.

Once you've successfully "converted" the "horrifically bad" Catholic practices among the poorest of the poor, then I'll listen.
*sigh*

Disagreement isn't hate. The fact that you think so, and many others, shows the degraded state of our intellectual and moral formation these days. I ask you to point out any person or group of persons I have actually described as "hating".

In the meantime, you may want to check out these links:

What is the Mass about, Anonymous? Is it about immanence or transcendence or is it the "unbloody continuation and representation of the bloody sacrifice of Calvary" as the Church has always taught?

What you write about Africa makes me think that you have read very little about the foreign missions, especially about those before Vatican II. Maybe you would like to read my blog "Die auswärtigen Missionen" where I almost exclusively post old articles and reports on the missions. I have translate button in the top right corner.

I cannot get into great detail here. Suffice it to say that Fr. Joseph Fräßle, SCJ, a famous German missionary in northern Congo in the early 1900's said that the liturgy had to be celebrated with great splendor and that certainly didn't involve any dancing, although this would often take place in very humble Churches without any kneelers, not in great Cathedrals with organs. But you can be sure that they saw to it that a worthy Church would soon be constructed, because God deserves the best we can give him, whether it be in the States or in Germany or in the heart of Africa.

And yeah, many very talented young men from Africa were indeed sent to Rome to study in the heart of Christendom, like many others from all over the world. One example would be Bishop Dr. Joseph Kiwanuka, M. Afr., a nephew of one of the Ugandan Martyrs. Others would receive a very comprehensive formation for their work in the sacred priesthood in their one country, and that would involve plenty of Latin, often starting at the ripe age of eleven or twelve. This was necessary so that the Church with it's universal rites could be spread by a native clergy since it was always considered to be the ideal. Pope Benedict XV stressed this in his encyclical "Maximum illud" which is well worth the read.