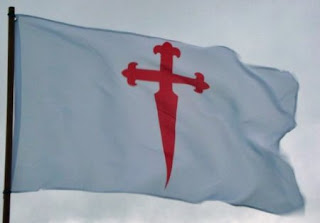 Last year a sign, this year an excerpt from Dom Gueranger's The Liturgical Year:

Nearly eight centuries, which to the heavenly citizens are but as a day, had passed over that tomb in the north of Spain, where two disciples had secretly laid the apostle's body. During that time the land of his inheritance, which he had so rapidly traversed, had been overrun first by Roman idolaters, then by Arian barbarians, and when the day of hope seemed about to dawn, a deeper night was ushered in by the Crescent. One day lights were seen glimmering over the briars that covered the monument; attention was drawn to the spot, which henceforth went by the name of the field of stars. But what are those sudden shouts coming down from the mountains, and echoing through the valleys? Who is this unknown chief rallying against an immense army the little worn-out troop whose heroic valour could not yesterday save it from defeat? Swift as lightning, and bearing in one hand a white standard with a red cross, he rushes with drawn sword upon the panic-stricken foe, and dyes the feet of his charger in the blood of 70,000 slain. Hail to the chief of the holy war, of which this Liturgical Year has so often made mention! St. James! St. James! Forward, Spain! It is the reappearance of the Galilean fisherman, whom the Man-God once called from the bark where he was mending his nets; of the elder son of thunder, now free to hurl the thunderbolt upon these new Samaritans, who pretend to honour the unity of God by making Christ no more than a prophet. Henceforth James shall be to Christian Spain the firebrand which the prophet saw, devouring all the people round about, to the right hand and to the left, until Jerusalem shall be inhabited again in her own place in Jerusalem.

And when, after six centuries and a half of struggle, his standard bearers, the Catholic kings, had succeeded in driving the infidel hordes beyond the seas, the valiant leader of the Spanish armies laid aside his bright armour, and the slayer of Moors became once more a messenger of the faith. As fisher of men, he entered his bark, and gathering around it the gallant fleets of Christopher Columbus, Vasco de Gama, Albuquerque, he led them over unknown seas to lands that had never yet heard the name of the Lord. For his contribution to the labours of the twelve, James drew ashore his well-filled nets, from west and east and south, from new worlds, renewing Peter's astonishment at the sight of such captures. He, whose apostolate seemed at the time of Herod III to have been crushed in the bud before bearing any fruit, may say with St. Paul: I have no way come short of them that are above measure apostles, for by the grace of God, I have laboured more abundantly than all they.

Today all Catholic hearts must invariably turn to Spain on this glorious feast day of St. James the Greater. Today let all of us, wherever we are, be spiritually united in the Sacred Heart in Santiago de Compostela.

Let our prayers be offered for, and in union with, the peregrinos arriving at the Cathedral today. And may our Saint be especially invoked in these days of Mohammedan attack in the West.

Happy feast day!
Posted by thetimman at 9:43 AM

A blessed feast day to you and yours, as well.