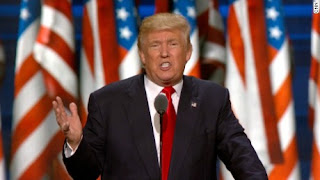 
Four months ago, I publicly declared my support, whatever that means, for the candidacy of Donald Trump. If you are interested enough to read today's post, you may want to reread that linked above.  Upon reflection, after listening to Trump's acceptance speech last night, it remains essentially true. As I wrote in March:

Trump's candidacy stands for the proposition of national sovereignty in foreign and domestic affairs, peace, a return to individual liberties that have been practically crushed by taxation and the tyranny of a P.C. outlawing of incorrect opinions. Though he is not the classic Henry-Hyde-gold-standard-pro-lifer, he states he opposes public funding for abortion and that he would appoint justices like Scalia.

Also, he has opened the acceptable range of free speech and debate on issues that the leftist establishment, aided and abetted by cowardly "conservatives" in government, has decided Are. Not. Allowed. To. Be. Held.  We are a short distance indeed from Catholic teaching on many issues being considered criminal behaviors and hate crimes.

Last night's speech was powerful and I'm still trying to come to terms with it. It was very good-- just not in the way to which I'm used. I used to be much more politically engaged in my youth and early middle age, and even on a semi-professional level.  So, I'm used to convention speeches.

Ronald Reagan truly had a gift. The man could reassure, embolden and inspire. He made you feel heroic and virtuous. He so set the standard of speechmaking in the television era that wittingly or unwittingly every candidate after him has tried to bottle the formula. No one else has ever succeeded like Reagan. Of course some are better than others.

But Trump's speech didn't use that mold. He presented essentially two modes, problem identification and promises and/or plans to solve them. At times he inspired, but mostly he took great pains to (in my opinion) accurately identify just how bad things are. And friends, it is bad. You know it is-- if you love your faith and the rule of law.

When a doctor tells you that you have cancer, it isn't pleasant, but it might save your life. Telling you that you are fine will end up killing you.  The press jumped all over the "dark" tone of the speech.  Waaahh!

In a text exchange with my brother, I wrote this:

I liked it. Very realistic portrayal of what's wrong. I thought it a sign of how far gone we are that certain passages made me uncomfortable. I think the press will skewer him. He's 100% right about 80% of his beliefs. He will do what he says if he can. I don't remember anyone, even Reagan, thanking religious people for support. The homosexual stuff shows we're far gone-- he seeks the classic "liberty" angle, which is better than we have now but ultimately illusory. He will win in a landslide.

This morning, I would not walk one thing back.

Remembering the disclaimer below, and that elections are possibly meaningless exercises, I say this: if you don't wish to vote because the thing is rigged or useless, I get that.  But if you think that elections matter, or count, or whatever, and choose the Hamletesque delicacy of abstaining because Trump isn't somehow pure enough, I think that is a bit nuts.  But hey, brother, its your life. Again, from March:

I can hear you saying, "You can't be serious.  He doesn't mean any of this. He will say anything to get elected!"  To which I respond, "Then he can be no worse than any Republican elected since at least 1980."

And you know what?  He might actually mean it. And that scares a lot of powerful people a whole lot-- people that I am 100% certain don't have my best interests at heart.

My own take on the Trump-Clinton matchup I posted on that most worthless of social media platforms, Facebook. After acknowledging the he may-or-may-not-come-through angle, I wrote this about his opponent:

Hillary, on the other hand, will not do anything good and will do a lot of bad. She hates the Church, hates families, heck, if she knew me she'd hate me. She is an unqualified, doctrinaire Communist.

Anyway, since some of you asked, that is how I feel about the whole deal after hearing the speech last night.

* The above assumes arguendo that any of this matters.

** FYI, Chris Jackson at The Remnant has written a Catholic apologia for Trump and has a Catholics for Trump website if that sort of thing interests you.
Posted by thetimman at 11:05 AM

Email ThisBlogThis!Share to TwitterShare to FacebookShare to Pinterest
Labels: "I would probably sue Rosie, because it would be fun. Rosie is a loser.", General Catholic News/Opinion, Secular News, Western Civ RIP

From a simply technical standpoint it was painful to watch. This was the first full speech of his that I've ever seen, and man, the shouting and the ridiculous gestures and the constant "believe me. believe me." made it tough to focus on his message. I've flirted with abstaining and I still reserve that right but I can't imagine that I won't ultimately vote for him.

I was just really looking forward to smiling as I marked the ballot for Cruz.

"...but mostly he took great pains to (in my opinion) accurately identify just how bad things are. And friends, it is bad." I bet this sentiment, more than anything else, is what draws you to trump. Misery loves company.

She probably won't say it, but I'll bet your wife tires of your constant pessimism. Think of the positive contribution you could make to those around you, and society in general, if you were more optimistic and happy.

Thank you, anonymous, for that uninvited yet completely inaccurate psychoanalysis.

I am also truly having a very difficult time discerning whether people who are almost exclusively posting hyperbolic articles or are making extravagant claims about the dangers and threats of a Trump presidency are heartfelt and sincere or are simply malicious provocateurs and consenting conspirators with the Clinton propaganda cabal.

I would not say that my husband is a pessimist. He is worried about what he sees going on in the world and possibly frustrated that people aren't fighting against these wrongs. However, we continue to live our lives pretty much as we always have; we have been blessed with a pretty good life and a happy home.

It is easy to misunderstand and put your own voice to another person's writings. He is simply giving his opinion to those who 1) are interested in knowing it (because they choose to read his blog) and 2) may not know these things are going on or do not know how it can affect things.

This election is a referendum on the alpha male.

I *personally* liked it and didnt find it ridiculous at all. I wish he was still here.

Yes, Hillary Clinton hates the Church. That's why she picked a devout Catholic for her Vice President. Timman, I can't figure out if you're putting people on with your "She hates the Church, she's a Communist" rhetoric or if you're so far out on the lunatic fringe that you really believe that stuff.

There's a great piece on lewrockwell.com about the coming Trumpian realignment of current foreign policy shibboleths:

"Here Trump has stumbled on the dirty little secret of the post-World War II security architecture so beloved by our elites: for the privilege of paying for their defense, and in effect militarily occupying our allies-cum-satellites, we allow them to flood our markets with tariff-free goods, while they wall off their markets with trade barriers and subsidies. As the Old Right economist and prophet of empire Garet Garrett put it at the dawn of the cold war, it’s a peculiar sort of empire in which 'everything goes out and nothing comes in.'"

This is going to be great.

Sam,
A devout Catholic? Really? Since we live in a culture where everyone can self define any reality that suits them and their personal life-style i.e. sexual gender, calling himself a 'devout Catholic' fits right in with 'manufactured reality' that is our time. I'm sure that on the surface he truly believes that he is, a devout Catholic. However his self assessment is purely superficial, since if he were to actually study our Faith in it's completeness, (not satisfying himself with today's modernist interpretation) it is hard to imagine that he could still hold the same belief on abortion. What part of the Church's declaration that Abortion is a SIN could be left to personal interpretation that would allow Senator Kaine or anyone to be an accomplice, regardless of their legislative duties? God before all things.

That Mrs. Clinton, who is not ignorant to Church teaching would select him as her running mate is not accidental. She 'needs' marginal Catholics, formed by the same ignorance as Senator Kaine as a part of her voting bloc. It adds icing to the cake that she can (she hopes) win the election on the backs of "Catholics" yet be the loudest proponent of MURDER in our Country.

Does she hate the Church? Only Mrs. Clinton can answer that. Has she made a purposeful decision in the hopes of undermining the Church and it's teaching on murder of the innocent? I think so.

Whoa! Parallel universes, extra dimensions, alternate realities - they must be real?!! Sam, I realize that since you just crossed over, you must be experiencing great confusion and disorientation, hang in there. Okay, here is a basic run down on this Universe – people who promote and vote for the murder of little babies in the womb (I’m sorry to inform you that this baby murder happens about 3,000 times daily here in this country alone in this dimension), are not “devout” Catholics – in fact, those individuals are literally the farthest you could be from being a “devout” Catholic this side of hell. The same goes for people who promote and vote for labeling sodomy and other sexual perversions as marriage. There are lots of other things too, but maybe we shouldn’t overwhelm you so soon. Likely, the foregoing is the same in the dimension/universe from which you hail. Brace yourself then. Here, Hillary Clinton, and Tim Kaine, are vehement supporters and enablers of murdering little babies while they are in their mothers womb. I know, right? Hang in there Sam, it’s a wild world out there. Sanctuary and guidance can be found at your local traditional Catholic parish – look for some guys known as the Institute or the Fraternity – they will be waiting for you.


I am with you. I fully expect people like Sam to trumpet the pro-abortion Kaine. contemptible mark Shea is already explicitly pro Hillary BC he finds Trump to be distasteful. arguing for Hillary is no. Ore defensible than voting for Obama. I called Shea out as morally and intellectually bankrupt. Gosh I'mso proud to say I am now among the banned!

All that said the speech was long and he sounded a bit more bellicose on trade than I'd like. He cannot be worse than Hillary or the average rino. I thinkhe loves the country and understands what makes it work--including religious practices of Americans even if he doesn't live so morally. Further his kids devotion and love for him is something important to consider.

Who the heck thought it a good idea to bring up a pitcher w/era over 50???? .... Matheny rant...thanks for allowing this!