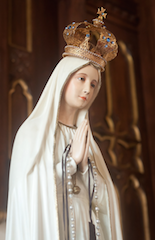 Our Lady deserves our prayers of reparation for the offense of the upcoming satanic blasphemies in Oklahoma City.  As they did for the last black mass, the SSPX, to their credit, will be celebrating a public Mass of reparation. The Fatima statue will be present.  The press release from the Fatima Center:

The Pilgrim Virgin Statue of Our Lady of Fatima will be present at a public Mass of Reparation against a blasphemous black “mass” in Oklahoma City.

The satanic ceremony scheduled to take place is particularly egregious as it is directly aimed at Our Blessed Mother.

“As has been widely reported in public media, a group of Satanists will be permitted to perform a black mass and a blasphemous ritual they call the consumption of Mary in the public building of the Civic Center. These acts, the details of which are so shocking and repulsive that they would even scandalize non-Christians in their unnatural depravity, are transformed from a private outrage to a public act by their occurrence on public ground. A public act requires a public reparation. Therefore, priests of the Society of St. Pius X will offer a traditional Latin Solemn High Mass in Bicentennial Park, in front of the Civic Center, 201 North Walker Ave., Oklahoma City, OK 73102, at noon on August 15.”

Our Pilgrim Virgin Statue will be present as well.

This is the second time a satanic black “mass” has occurred in Oklahoma City.

Father Patrick McBride, who services the St. Michael Chapel, notes “In 2014, we offered in a nearby downtown hotel a public Mass of Reparation in atonement for the first publicly performed black mass. This time we wanted to bring the Holy Sacrifice of the Mass to the very ground on which these blasphemies will occur. We will raise up to heaven Our Lord’s Most Precious Blood in reparation for the insults that He and His Blessed Mother will receive from these people who regrettably respond to His loving embrace with insults and outrage. We particularly implore the protection of the Blessed Mother as we make reparation to Her Divine Son.”

Those interested in joining this important act of reparation may contact Brian M. McCall or Jeromy Jones at St. Michael’s Chapel by email at stmichaelfriend@gmail.com.

We need the SSPX!

I would phrase it as we all need the Church; the Church would benefit from a reconciliation with the SSPX, as would many souls languishing in areas where there is not a currently available offering of the true Mass and sacraments. I also think the faithful attending the SSPX chapels would benefit from certainty of the validity of certain sacraments without needing a degree in canon law.

My point in the post, and this comment, is not to pick a fight at all. My positions are well known on SSPX issues. They deserve credit for this endeavor, and yes, they should be given faculties for their priests to operate like any other Catholic priests.

But the Church saves us, we don't save the Church-- and that remains true though the captain of the ship is doing his best to blow it up.

Thank you for bringing this up again, Timman. I just noticed that I forgot to pray the Litany of Loretto which I had done for the last couple of weeks since hearing about this.

Indeed, I agree with your position on the SSPX. We should not focus too much on a single group since the Church survived without the Jesuit Order during decades, and nobody will deny that the Jesuit Order was more important for the Church than the SSPX is today. Nonetheless, their regularization would be a great reason to rejoice and I hope we will live to see that day.

It's quite a statement to say that the 'Jesuit order was more important to the Church than the SSPX is today'. Not really, right? God uses people, societies, movements to his own Good purpose in history as they are needed. To measure one against another is impossible.

More to the point of this post, I would offer that all Catholics are directly affected by this atrocity against Our Lord and His Mother and as Catholics we are all obligated to make reparations for this outrage. There will be a rosary procession immediately following the 6pm Mass on August 15th, the Feast of the Assumption, at St. Mary's Assumption (the local Society Chapel). One of the primary intentions will be reparation to Our Lady for the public act of blasphemy perpetrated by the satanists in Oklahoma City earlier that day. It would be an act of solidarity for all Traditional Catholics to participate and all are certainly welcome.