Somebody Tell Me Why He Is Wrong 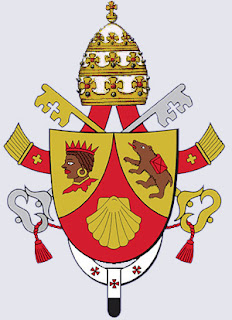 Louie Verrecchio is, shall we say, confrontational. And I many times do not like the tone of his work-- though he makes good points very often, there is a lack of something like necessary decorum in dealing with certain persons and matters.

That, friends, is my disclaimer of why I'm linking to Mr. Verrecchio's post here.  I'm sure some of my readers will laugh at my disapproval of another's lack of decorum. Pot, kettle.  And I'm sure Louie would be amused at my reservations. But no matter-- when you're right, you're right.

He raises a very good question.  And it is worth considering well:

Benedict's bombshell goes all but unnoticed

If it happens that the Roman Pontiff resigns his office, it is required for validity that the resignation is made freely and properly manifested but not that it is accepted by anyone. (1983 Code of Canon Law, Canon 332 §2)

Note well that two things are “required” in order for a papal resignation to be valid; it must be both “made freely” and  “properly manifested.”

Let’s talk about the latter first.

First and foremost, it is manifested by way of declaration or published statement; i.e., some sort of pronouncement on the part of the pope-resignee that makes his intent known to the members of the Church.

That, however, is not all, and for a very good reason that we will consider momentarily.

A papal resignation is also properly manifested by way of outward signs that clearly indicate that the man in question is no longer the Roman Pontiff.

Common sense and the witness of history alone indicate that the antithesis of a papal resignation “properly manifested” on the part of a former pope includes such things as:

– Allowing oneself to be addressed publicly as “Your Holiness” (and by his would-be successor, no less)

– Continuing to live within the enclosure of the Vatican

In the case of Benedict XVI, something is being manifested, and deliberately so!

In other words, it is the height of naivete to presume that such actions as those listed above are just innocent mistakes in judgment.

This brings me to the reason why the outward signs that accompany a declaration of intent to resign the Petrine ministry are so very important.

Commenting on the former requirement set forth in Canon 332 §2 (that the resignation be “made freely”), Cardinal Walter Brandmüller recently said:

"The simple declaration of free resignation on the part of the person in question [the pope] is not enough, because depending on the circumstances that statement could easily be forced, and the resignation therefore invalid."

This, my friends, is really just common sense. Think about it:

If you answered your telephone while a burglar was holding a gun to your head, you may very well insist to the caller that all is well. The caller in his turn would then go about believing and behaving as if all truly is well, and no one may be the wiser.

That is, unless you were clever enough to hint that all is not as it appears to be in the hopes that your caller might have ears to hear.

For instance, you might raise a red flag by making statements that your caller would readily recognize as so entirely absurd and irrational that he’d be hard pressed not  to inquire further. We’ll come back to this thought in a moment.

One wonders, is Cardinal Brandmüller suggesting that he harbors reservations about the freedom of Benedict’s resignation? Does he mean to imply that others in the Sacred College hold similar doubts?

In any case, I suspect that no small number of prelates sincerely believe that Benedict was forced to resign, and yet are unwilling to go public with their concerns.

Hard to tell you that...while I'm not a legal or canon law expert, some sound reasoning.

A priest you know

Why can't you just take Pope Benedict at his word? Frankly, it's disrespectful to engage in this sort of wild-eyed speculation.

Too much conjecture about something that is moot at this point. We need to seek the grace of today to live as a faithful Catholic and prepare for 2017.

First, the question is whether it is "Benedict's word" at all, as if he were coerced it isn't his, but another's word. That's the whole question, isn't it?

Second, if you are instead making the point that there isn't enough evidence to switch from what should be our assumption-- that the abdication was valid-- then I say that is a perfectly defensible point of view. I hold it myself, as a matter of fact, though I have practical scepticism.

Third, it is not disrespectful, in my opinion, to try to ascertain the identity of the Pope, to whom we are required to submit in order to be saved. I think it may be THE essential question of the day.

Priest whom I know,

Did we speak of this earlier this year? Or are there multiple priests I know who are wondering?

In the author's scenario, we are the person who's answering the phone while the caller who tells us everything's fine (Benedict) has a gun held to his head by a burglar (Francis/curia/?). The problem is that Benedict isn't blinking out morse code or giving us hints that's all's not well. In fact he's kind of doubling down on his assertions that things really are okay. So the question becomes: what are we to do? We can continue to talk amongst ourselves, saying "boy that's weird, I wonder if something's amiss" but we don't really have any evidence that allows us to leap into action. The more we go down this path, the more we look like kooks.

Can't argue with either of you. But I will say I have never cared if I look like a kook. Follow the truth where it leads, if possible, whether you are a kook or not.

It's a good thing you don't mind looking like a kook, because you surely are one. There was a time I thought you made a lot of sense, but you have really lost it.
A regular yet wary reader am I.


I also think there is plenty of rupture between the way that Ratzinger/Benedict spoke/wrote before/during his papacy and the way Benedict is now speaking/writing. Dementia? Foul play? Cowardice?

I can't make sense of any of this. I can live my state of life and pursue holiness, but there are definitely unanswered questions.

For the record, I don't think you're crazy for questioning. I think some who do not question are afraid of where the truth might lead.