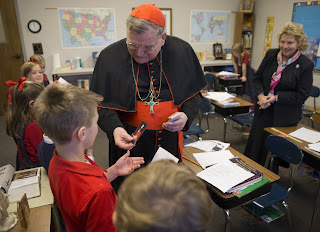 Can I please get an Amen for the ongoing witness and leadership of Raymond Cardinal Burke?

His Eminence is the Archbishop Emeritus of Saint Louis.  He chose that title, and not that of his titular Church given him at his elevation. How blessed are we in Saint Louis to have had such a shepherd, and who still treasures his flock here?  It is unnecessary to go over his entire history here, but let's instead focus on his efforts to defend the faith in this pontificate.

Cardinal Burke tirelessly promotes the faith, the liturgy, and the rights of Catholics. He does so publicly and privately, and in the ecclesial and political arenas.

Mistake not, he is hated by the enemies of the Church, and often underappreciated by Catholics themselves.  He does not seek the spotlight, and does not shun its glare when the faith is at stake. He is a true warrior for Christ. Gentle. Strong.

He asks us to storm heaven with prayer, especially the Rosary. For what intention? How's this:


That bishops and priests will have the courage to teach the Truth and defend the Faith against all her enemies both within the Church and outside the Church. And may all confusion be dispelled from the Church.

He is among the leaders of the effort to defend the Church's timeless teaching, Her dogmas and doctrines, concerning marriage and the Eucharist. And really to hold the faith as it was taught by the Lord Himself and handed down in Sacred Tradition. And if the unthinkable should happen and the pope not uphold the faith, then to bring blessed clarity.  No, His Eminence is not absolutely alone, but he stands with few others of the hierarchy. He stands, at considerable risk (as the worldly would reckon it), to witness to Christ. For the love of Christ and His Church.

This is a period all too reminiscent of the Crucifixion, and how few there were to stand with Our Lord then?

And he stands for the timeless Liturgy, which is part and parcel of standing for the Catholic faith.

He, and some few others of the hierarchy and laity, stand in the gap. He is holding the line.

Being a life-long St. Louisan, and knowing the Cardinal, I want to publicly support His Eminence, express my gratitude for his witness, and assure him of my prayers.

Can I get an Amen?

A resounding Amen from me!

Did anyone else hear the sad ignorance on 1120 am today of the ridicule of Crdl Burke and slander of the Church. It is amazing to me how 5 questions to be answered with a simple yes or no can stir up so much. I keep calling to mind 'Let you yes mean yes and no mean no, anything else is of the evil one."

Amen!! May God bless and protect him.

BTW
Is anyone aware if any church in St Louis took Cardinal Sarah's suggestion for Ad Oreintem for Advent?

It feels awkwardly revivalist Baptist to me, but I will give you an Amen. But I am pronouncing it "Ahmen."

It was a bittersweet moment when Cardinal Burke left St. Louis to serve the greater Catholic Church. But serve he has! Even when facing the "consequences" of his frank honesty, he continues to speak truth. Some in St. Louis still, selfishly, wish him back.

I have been offering my suffering for the sanctification of the church.

We need to all get behind Cardinal Burke. He is courageous and true.

Be grateful: Cardinal Napier has swallowed the Kool-aide!

I absolutely love Cardinal Raymond Leo Burke. Why? Because he is a humble, holy, loving, faithful shepherd who can be trusted to lead us in the holy will of God. Many years ago, I watched Cardinal Burke on EWTN as he consecrated the Cathedral in St. Louis to The Sacred Heart of Jesus. The most beautiful thing I have ever witnessed. His devotion to The Sacred Heart is contagious and edifying. He is truly a Shepherd after the Sacred Heart of Jesus. And like a good father of a family protects the children entrusted to his care. I pray for him everyday.

Well said. Would that we had a thousand more prelates like him.