A Thought for Christmastide 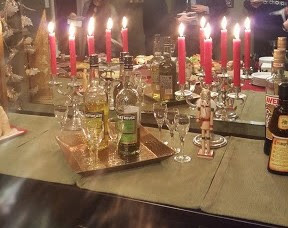 There was another custom, which originated in the Ages of Faith, and which is still observed in many countries. In honour of the Three Kings, who came from the East to adore the Babe of Bethlehem, each family chose one of its members to be King. The choice was thus made. The family kept a feast, which was an allusion to the third of the Epiphany-Mysteries - the Feast of Cana in Galilee - a Cake was served up, and he who took the piece which had a certain secret mark, was proclaimed the King of the day. Two portions of the cake were reserved for the poor, in whom honour was thus paid to the Infant Jesus and his Blessed Mother; for, on this Day of the triumph of Him, who, though King, was humble and poor, it was fitting that the poor should have a share in the general joy. The happiness of home was here, as in so many other instances, blended with the sacredness of Religion. This custom of King’s Feast brought relations and friends together, and encouraged feelings of kindness and charity. Human weakness would sometimes, perhaps, show itself during these hours of holiday-making; but the idea and sentiment and spirit of the whole feast was profoundly Catholic, and that was sufficient guarantee to innocence.

King’s Feast is still a Christmas joy in thousands of families; and happy those where it is kept in the Christian spirit which first originated it! For the last three hundred years, a puritanical zeal has decried these simple customs, wherein the seriousness of religion and the home enjoyments of certain Festivals were blended together. The traditions of Christian family rejoicings have been blamed under pretexts of abuse; as though a recreation, in which religion had no share and no influence, were less open to intemperance and sin. Others have pretended, (though with little or no foundation,) that the Twelfth Cake and the custom of choosing a King, are mere imitations of the ancient pagan Saturnalia. Granting this to be correct, (which it is not,) we would answer, that many of the old pagan customs have undergone a Christian transformation, and no one thinks of refusing to accept them thus purified. All this mistaken zeal has produced the sad effect of divorcing the Church from family life and customs, of excluding every religious manifestation from our traditions, and of bringing about what is so pompously called, (though the word is expressive enough,) the secularisation of society.

--from a discussion on the customs of Epiphany in The Liturgical Year, by Dom Prosper Gueranger
Posted by thetimman at 12:44 PM

Email ThisBlogThis!Share to TwitterShare to FacebookShare to Pinterest
Labels: church as mother of culture, why do Catholics drink so much?

I have often thought that an annual Twelfth Night party would be a wonderful way to keep the glow of Christmas alive in our families beyond December 25th (the day after which, for many of us, it begins to wane in spite of what we know should be the case). This could be such a fun party for children, who could act out the story of the Wise Men, or even thrill to the arrival of gorgeously-costumed visiting "Wise Men" (whether professional actors, or home-grown adult volunteers). Or, it could simply be a pleasant reason for grown-ups to gather and quietly enjoy good food, drink, and fellowship.

Such an event could be an opportunity for the individual or couple who might, for one reason or another, never be called upon to host Christmas Eve or Christmas Day gatherings, to have the fun of bringing family and/or friends together for a delightful evening that could become their own special contribution to the festivity of Christmastide.