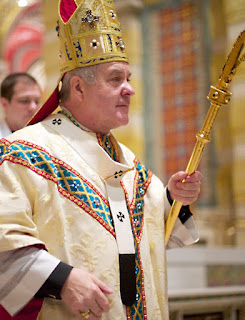 Good for His Grace on this one.

The referenced euphemistic phrase includes decisions to open or run an abortuary, kill one's own baby, support the killing of millions of babies, or using or supporting the use of contraception. So, if you don't want Planned Parenthood to open a new abortuary in your rental property, prepare to be subject to investigation, fine and arrest. Prepare to be sued. Your employees demand abortion or contraception coverage in your insurance plan? Better give it to them or be fined. Heck, the law is worded so badly that if you try to talk an employee out of a pro-abortion political position and make him feel bad, you could be guilty of discrimination.

Why in the world would this Alderman want to enact such a bill? What problems exist now? Well, read her own words:


She said she had no example of such discrimination in St. Louis, but added, “With a (Donald) Trump presidency and a Republican supermajority in Jefferson City, attacks on women’s rights are real.”

There you have it folks. That is the logic we face in the battle for civilization.

The full statement of Archbishop Carlson:

The Board of Aldermen of the City of St. Louis is considering an ordinance (Board Bill 203) that attacks the most deeply held moral and religious convictions of the people of this great city. This proposed ordinance seeks to make St. Louis a sanctuary city for abortion, an act that kills innocent unborn children. This is not what our city should stand for; rather, St. Louis should be a sanctuary for life and compassion, especially compassion for mothers and their developing children.

Board Bill 203 is vague and ambiguous but could have terrible consequences for religious institutions. For example, a Catholic school or Catholic Charities agency could be fined by the City of St. Louis for not employing persons who publicly promote practices such as abortion. In addition, our Catholic institutions could be fined for not including coverage for abortion in their insurance plans.

Board Bill 203 could also allow the City of St. Louis to fine landlords and others who do not want to rent to or be associated with the abortion industry. This proposed ordinance, therefore, would force the people of St. Louis to be complicit in the profound evil of abortion. This would be a flagrant violation of religious liberty and individual rights of conscience.

I urge the citizens of St. Louis to oppose Board Bill 203. Protection and care for human life at all stages of development from conception until natural death is a fundamental moral value shared by Catholics as well as many other people of faith. City ordinances should respect all people, including women facing unplanned pregnancies, unborn children, and people who desire to live their lives in accordance with their religious convictions.

As the shepherd of the faithful Catholics of this region, let me be clear that the Archdiocese of St. Louis cannot and will not comply with any ordinance like Board Bill 203 that attempts to force the Church and others to become unwilling participants in the abortion business. There is no room for compromise on such a matter. This is a matter of fundamental religious and moral beliefs.

Rather than aiding and abetting the abortion industry, the archdiocese, through its various ministries and programs, will continue to extend both spiritual and material assistance to all those in need, especially the poor and those women facing crisis pregnancies who feel they have no one else to turn to for help—both during their pregnancies as well as after their child is born.

I urge the St. Louis Board of Aldermen to defeat Board Bill 203.  I appeal to the humanity and the love of all freedom-loving citizens of St. Louis to make their voices heard in defense of human life.
Posted by thetimman at 10:16 AM

Remember, the Left never gives up. It never sleeps. Whatever it takes. We have to respond knowing this. We cannot sleep or quit.

Thank you Archbishop Carlson for staying up with this type of proposed legislation. I applaud you and will pray for you.