No Need to Respect the Church: Board of Aldermen Passes Bill to Limit First Amendment Rights to Disagree with Murdering Babies 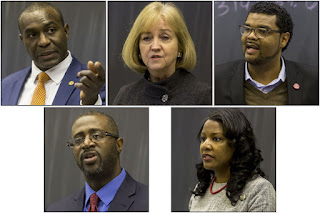 Congress shall make no law respecting an establishment of religion, or prohibiting the free exercise thereof; or abridging... the right of the people peaceably to assemble...

...No state shall make or enforce any law which shall abridge the privileges or immunities of citizens of the United States; nor shall any state deprive any person of life, liberty, or property, without due process of law; nor deny to any person within its jurisdiction the equal protection of the laws.

Constitution be damned. And for that matter, why in the world would the Saint Louis City Board of Aldermen-- the legislative body for what used to be called The Rome of the West-- have to care that the Catholic Church is vehemently opposed to its murderous, unconstitutional agenda?

The Board of Aldermen of the City of Saint Louis, the municipal version of a failed state seemingly designed to make the denizens of Detroit and Cleveland feel optimistic, has decided by 17-10 vote to make our city an abortion "sanctuary city". One may not now even disagree with any baby-killing advocate without legal consequences. How so? Well, the Archbishop states it well in his wonderfully defiant statement, and I have written on it here before.

EVERY mayoral candidate on the Democrat side voted for this. Hey Lyda Krewsen, I WILL NOT take a Democrat primary ballot to vote for your sorry hide. Hope you lose by a single vote.

I guess we can pray that gay marriage Slay will not sign the bill. Right.

I was considering moving my business into the city. Not now.

Finally, why does the St. Louis Review headline reference this as a "reproductive health bill"? Is this a Catholic publication?

And I mean it. When I think of the difficulties that actually exist in Saint Louis, preventing its civic rebound, I think of violent crime in nearly every neighborhood and in the "tourist" zones as well; I think of a dismal public school system that chases families out of the city; I think of the Board of Aldermen itself, a vestige of a political machine patronage system set up when the city was at all important; I think of Catholic schools and parishes closing and taking with them the anchors of neighborhood viability; I think of a truly bizare tax system that penalizes people for living or working in the city.

Failed state model indeed. A merger with the county is the only thing that could save the edifice, but like all failed states, I can see why county government would want "extreme vetting" before letting any city official near it.

HEY VOTERS: EVERY DEMOCRATIC MAYORAL CANDIDATE VOTED FOR THIS. Are any of them Catholic? I mean, at least as Catholic as outgoing Mayor Slay, who violated the Missouri Constitution to allow sodomites to pretend to get married, and who should have been arrested for doing so? I'm sure any Catholic who voted for this abomination will be denied Holy Communion by their pastor. Right? Of course excommunications are not to be hoped for.

Finally, a couple of notes on my Facebook comment, above. It seems someone from the Review reads Facebook, because the headline of the story was changed to remove the word "health" from the "reproductive decisions" we are not allowed to criticize. It is just as milquetoast as it gets. Maybe the Review is already self-censoring to avoid problems with this bill. How are we ever going to win when we use the enemy's terminology for genocide?

And I will never move my business interests into the city while this bill stands.

St. Louis, for some reason known only to God, seems to be one locus of the major civilizational conflict of our times. God have mercy on us.
Posted by thetimman at 10:10 AM

I've had a to-hell-with-the-city attitude for a while now. Ready to get out at the earliest opportunity. Determined not to move my wife's business into the city boundaries. Head to the county and don't look back.

But the rhetoric that I keep hearing from the Left indicates that they're not going to take 'no' for answer when it comes to the merger. If they can't convince people, they'll keep pushing until they find a way to force it.

I suppose we should be more concerned with the fact that Catholics who take their faith seriously are going to be jailed soon enough.

Also, while I appreciate the Archbishop's strong words on this, it might be time to start telling some politicians that they're not to present themselves for communion.

I tried to leave voicemail on both numbers for the alderman, but both mailboxes were full. Somebody surely has been making their wishes known to city council, and I don't think the council listened.

Shame on those seventeen members of the Board of Aldermen who made this happen. What a disgrace.

An addendum to this issue: The Board of Aldermen will be cut in half in 2020. I believe that there are 28 and the number will be cut to 14.

If you are a City resident, I strongly urge you to check out Andrew Jones, Republican candidate for mayor. I had a conversation with him in December and he admitted to my husband and me that the ROOT of many of the problems in the City these days is the generations of children being raised in homes without a mother and a father. Jones recognizes that the government cannot fix this problem- that it needs to be fixed one-on-one through personal friendship. But I was very relieved to see that he recognizes a massive problem in our City. The Democratic candidates certainly do not.

Well, it's official. Mayor Francis Gay Marriage Slay signed this piece of excrement. He should be excommunicated.

Since Mayor Slay is a Maronite Catholic, does Abp Carlson have jurisdiction over him? i.e., have the authority to excommunicate him? Or would it be the Maronite bishop?

As an addendum about the structure of the Board of Aldermen, I was given up to date information last evening at a neighborhood meeting. The 2020 census will decide the makeup of the new and altered 14 wards cut from 28. The first election for this 14 member board will be in 2025. The 14 members will have expanded authority as well as a big time salary.