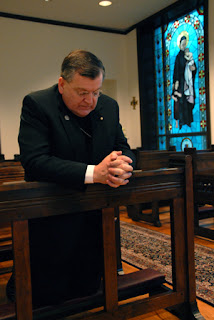 Gospel for the Fifth Sunday after Epiphany (Matthew 13:24-29)

At that time: Jesus spoke this parable to the multitude, saying: The kingdom of heaven is likened to a man that sowed good seed in his field. But while men were asleep, his enemy came and over-sowed cockle among the wheat and went his way. And when the blade was sprung up, and brought forth fruit, then appeared also the cockle. Then the servants of the good man of the house, coming said to him: Sir, didst thou not sow good seed in thy field? whence then hath it cockle? And he said to them: An enemy hath done this. And the servants said to him: Wilt thou that we go and gather it up? And he said: No, lest perhaps gathering up the cockle, you root up the wheat also together with it. Let both grow until the harvest, and in the time of harvest I will say to the reapers, Gather up first the cockle, and bind it in bunches to burn, but the wheat gather ye into my barn.

The Kingdom of Heaven, here spoken of by our Lord, is the Church Militant,- the society of them that believe in him. And yet, the field he has tilled with so much care is oversowed with cockle; heresies have crept in, scandals have abounded; are we, on that account, to have misgivings about the foresight of the Master, who knows all things, and without whose permission nothing happens? Far from us be such a thought! He himself tells us that these things must needs be. Man has been gifted with free-will; it is for him to choose between good and evil; but, God will turn all to his own greater glory. Heresies, then, like weeds in a field, may spring up in the Church; but the day must come when they will be uprooted; some of them will wither on the parent-stems, but the whole cockle shall be gathered into bundles to burn. Where are now the heresies that sprang up in the first ages of the Church? And in another hundred years, what will have become of the heresy, which, under the pretentious name of The Reformation, has caused incalculable evil? It is the same with the scandals which rise up within the pale of the Church; - they are a hard trial; but trials must come. The Divine Husbandman wills not that this cockle be torn up, lest the wheat should suffer injury. First of all, the mixture of good and bad is an advantage; it teaches the good not to put their hopes in man, but in God. Then too, the mercy of our Lord is so great, that at times the very cockle is converted, by Divine grace, into wheat. We must, therefore, have patience. But, whereas it is when the men are asleep that the enemy oversows the field with cockle, it behoves us to pray for Pastors, and ask their Divine Master to bless them with that Vigilance, which is the primary condition of the flock being safe, and is so essential a quality in every Bishop, that his very name is, - one who watches.

--Dom Gueranger, The Liturgical Year
Posted by thetimman at 10:07 AM

Are you suggesting this has some relevance to current events? *wink*

timman, did you catch this eye-opener?

"In the old days men had the rack, now they have the press." Oscar Wilde