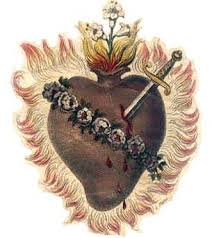 I think I've begun about five posts in the past few days that I haven't finished. Let's see how this one pans out.

Taking a survey of the scene in the Church and world these days is tough-- not so much because most of the news is bad, but because we are in a reality of such constant progression in badness, that reporting on the bad of the day is obsolete as the next day's badness exceeds it--making the alarm, outrage, suffering or correction of the previous day's badness seem almost quaint.

As though I long for the good old days when Francis merely told some old gal on the phone to (wink-wink) go to Holy Communion but bear in mind it's just our little secret! A veritable Tridentine moment, compared to now.

As an aside, this is why I admire the work, especially these days, of Steve Skojec at 1P5, and Michael Matt and Chris Ferrara at The Remnant. Because myself and other bloggers of the Catholic remnant camp have been posting less regularly. Totally understandable for the reasons I listed, as well as for "real-world" crises, work-crushes, personal matters, etc., that I don't for a moment think are coincidental. But the two above, and perhaps others (I don't want to slight anyone) keep slogging on.

And what a slog it is to do the Lord's work in this terrain of Jell-O.

I mean how bad is it, when fresh off of my total consecration to Jesus through Mary, consecrating everything I am and have to the honor and glory of the Mother of God, made on the Feast of Our Lady of Fatima, I couldn't scrounge up the energy and will to take on the horrific comments of the self-proclaimed "bishop in white" at Fatima, because I knew it would only be succeeded by another outrage soon enough? Well, true though that is, I will correct this matter below.

So, making no predictions of anything by way of events, I return to Fatima. Fatima is the key to our times. On the temporal side, the Deep State, globalist war against Trump (or at least against what Trump promised), the constant vilification and provocation of Russia seems destined to produce fruit-- good or rotten, depending on the action of the Church herself. On the spiritual side, the apostasy of the Church (news flash) goes all the way to the top. When will the Church obey Our Mother?

So what did Francis say at Fatima, on top of the watering down of the Fatima message and non-consecration on which I would have bet a million dollars? Here is the relevant portion (I give the whole paragraph for context, but emphasize the money lines):

Pilgrims with Mary…  But which Mary?  A teacher of the spiritual life, the first to follow Jesus on the “narrow way” of the cross by giving us an example, or a Lady “unapproachable” and impossible to imitate?  A woman “blessed because she believed” always and everywhere in God’s words (cf. Lk 1:42.45), or a “plaster statue” from whom we beg favours at little cost?  The Virgin Mary of the Gospel, venerated by the Church at prayer, or a Mary of our own making: one who restrains the arm of a vengeful God; one sweeter than Jesus the ruthless judge; one more merciful than the Lamb slain for us? (Francis, 2017)
_____________


Francis canonized two of the visionaries, Francisco and Jacinta Marto, while at Fatima. What did St. Francisco say about Mary? Echoing Hilary White's piece here, these are the words of the new saint:

‘Our Lady can no longer hold back the Arm of her beloved Son from the world. It is necessary to do penance. If people change their ways, Our Lord will still spare the world; but if they do not, the chastisement will come.’ (St. Francisco 1920)

By all appearances, intentional or not, this is a rebuke of the saint the pope came to canonize, an open discouragement of the Fatima apparition and message, and a slight to Our Lady's Mercy and Our Lord's Justice. In my opinion, a new low, even for a pontificate of lowest lows.

But do not be afraid. Mary cannot be denied. If her Son cannot deny her anything, what chance does hell and the world stand against her?

And into the morass of the desert of the real that is the visible hierarchy of the Church comes Cardinal Burke. The great Cardinal, ever stalwart (though deliberate to a fault to my impatience), drafter and proposer of the dubia, advocate of the Church's integrity in Malta, attacked on all sides-- now comes forth to cast another Clark Bar into the modernist punchbowl:

Remember how the idea fact that the consecration of Russia to Mary's Immaculate Heart at Fatima has NOT been done has been derided by Modernists of the prog- and neo- variety? Remember the scorn towards Fr. Gruner (who did the most on keeping this push alive) and everyone else who acknowledged the obvious truth that no pope has obeyed Mary's wishes on this?

Well, Cardinal Burke has now openly called for the Pope to consecrate Russia, in union with the world's bishops, to Mary's Immaculate Heart.  You know, JUST LIKE SHE ASKED.

If the pope does this, Russia will be converted and a period of peace will be given to the world. If not, “Russia will spread its errors throughout the world, raising up wars and persecutions against the Church. The good will be martyred, the Holy Father will have much to suffer, and various nations will be annihilated.”


Please pray and yes, demand that the Pope consecrate Russia as Our Lady has asked. Remember, in the end, Her Immaculate Heart will triumph, and all this will be done. Why must we continue to suffer before believing her?
Posted by thetimman at 2:55 PM

Thanks for pointing out the criticism of St. Francisco's account of our Lady's mercy. I suppose that, if one wanted to give Pope Francis the benefit of the doubt, we could blame the author of the homily. Assuming, with fair reason, that he doesn't write all of his homilies. But still, the buck falls on him and, I assume with fair reason, that he is not much interested in corrections to what he's said.