"Sing in Me, Oh Muse, and through Me Tell the Story."-- The Nobel Lecture of Bob Dylan 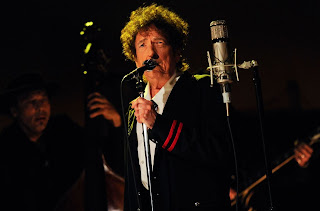 The full lecture can be found here. Better yet, listen to it here.  As you should expect, it is filled with wisdom and a deep insight into human nature, the hallmark of Dylan's poetry. Viewed from the proper perspective, Dylan's Catholicity permeates the remarks.

Grace builds upon nature, and Dylan's God-given talent as poet and lyricist channels grace a-plenty to build upon nature.  Enjoy the speech, but I submit for your brief consideration the following three excerpts, tracking his own structure.  Dylan reflects on three books that deeply affected him at a young age as a way to give an insight into his music: Moby Dick, All Quiet on the Western Front, and The Odyssey.

Everything is mixed in. All the myths: the Judeo Christian bible, Hindu myths, British legends, Saint George, Perseus, Hercules – they’re all whalers. Greek mythology, the gory business of cutting up a whale. Lots of facts in this book, geographical knowledge, whale oil – good for coronation of royalty – noble families in the whaling industry. Whale oil is used to anoint the kings. History of the whale, phrenology, classical philosophy, pseudo-scientific theories, justification for discrimination – everything thrown in and none of it hardly rational. Highbrow, lowbrow, chasing illusion, chasing death, the great white whale, white as polar bear, white as a white man, the emperor, the nemesis, the embodiment of evil. The demented captain who actually lost his leg years ago trying to attack Moby with a knife.

We see only the surface of things. We can interpret what lies below any way we see fit. Crewmen walk around on deck listening for mermaids, and sharks and vultures follow the ship. Reading skulls and faces like you read a book. Here’s a face. I’ll put it in front of you. Read it if you can.

[...] When Starbuck tells Ahab that he should let bygones be bygones, the angry captain snaps back, “Speak not to me of blasphemy, man, I’d strike the sun if it insulted me.” Ahab, too, is a poet of eloquence. He says, “The path to my fixed purpose is laid with iron rails whereon my soul is grooved to run.”  Or these lines, “All visible objects are but pasteboard masks.” Quotable poetic phrases that can’t be beat.

Finally, Ahab spots Moby, and the harpoons come out. Boats are lowered. Ahab’s harpoon has been baptised in blood. Moby attacks Ahab’s boat and destroys it. Next day, he sights Moby again. Boats are lowered again. Moby attacks Ahab’s boat again. On the third day, another boat goes in. More religious allegory. He has risen. Moby attacks one more time, ramming the Pequod and sinking it. Ahab gets tangled up in the harpoon lines and is thrown out of his boat into a watery grave.

Ishmael survives. He’s in the sea floating on a coffin. And that’s about it. That’s the whole story. That theme and all that it implies would work its way into more than a few of my songs.

Reflecting on All Quiet on the Western Front:

All Quiet on the Western Front was another book that did. All Quiet on the Western Front is a horror story. This is a book where you lose your childhood, your faith in a meaningful world, and your concern for individuals. You’re stuck in a nightmare. Sucked up into a mysterious whirlpool of death and pain. You’re defending yourself from elimination. You’re being wiped off the face of the map. Once upon a time you were an innocent youth with big dreams about being a concert pianist. Once you loved life and the world, and now you’re shooting it to pieces.

[...]You’ve come to despise that older generation that sent you out into this madness, into this torture chamber. All around you, your comrades are dying. Dying from abdominal wounds, double amputations, shattered hipbones, and you think, “I’m only twenty years old, but I’m capable of killing anybody. Even my father if he came at me.”

Yesterday, you tried to save a wounded messenger dog, and somebody shouted, “Don’t be a fool.” One Froggy is laying gurgling at your feet. You stuck him with a dagger in his stomach, but the man still lives. You know you should finish the job, but you can’t. You’re on the real iron cross, and a Roman soldier’s putting a sponge of vinegar to your lips.

[...]All that culture from a thousand years ago, that philosophy, that wisdom – Plato, Aristotle, Socrates – what happened to it?  It should have prevented this. Your thoughts turn homeward. And once again you’re a schoolboy walking through the tall poplar trees. It’s a pleasant memory. More bombs dropping on you from blimps. You got to get it together now. You can’t even look at anybody for fear of some miscalculable thing that might happen. The common grave. There are no other possibilities.

He’s always being warned of things to come. Touching things he’s told not to. There’s two roads to take, and they’re both bad. Both hazardous. On one you could drown and on the other you could starve. He goes into the narrow straits with foaming whirlpools that swallow him. Meets six-headed monsters with sharp fangs. Thunderbolts strike at him. Overhanging branches that he makes a leap to reach for to save himself from a raging river. Goddesses and gods protect him, but some others want to kill him. He changes identities. He’s exhausted. He falls asleep, and he’s woken up by the sound of laughter. He tells his story to strangers. He’s been gone twenty years. He was carried off somewhere and left there. Drugs have been dropped into his wine. It’s been a hard road to travel.

In a lot of ways, some of these same things have happened to you. You too have had drugs dropped into your wine. You too have shared a bed with the wrong woman. You too have been spellbound by magical voices, sweet voices with strange melodies. You too have come so far and have been so far blown back. And you’ve had close calls as well. You have angered people you should not have. And you too have rambled this country all around. And you’ve also felt that ill wind, the one that blows you no good. And that’s still not all of it.
Posted by thetimman at 4:23 PM