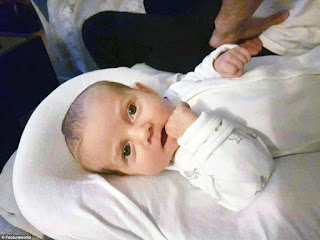 Little Charlie Gard is dead, killed by the godless secular state in service of Moloch. Praise God that he was baptised, and assuming that baptism was properly done, he is enjoying the Beatific Vision, nevermore to suffer. May he pray for us who are left behind-- obviously for his parents who love him, but also for the coming victims of the powers of this world. They hate Christ, and therefore they hate us.

Pray for us, Charlie, and may your innocent soul beg God to forgive us all.  May his killers repent, for a terrible justice is the alternative.

And another angel came, and stood before the altar, having a golden censer; and there was given to him much incense, that he should offer of the prayers of all saints upon the golden altar, which is before the throne of God. And the smoke of the incense of the prayers of the saints ascended up before God from the hand of the angel. And the angel took the censer, and filled it with the fire of the altar, and cast it on the earth, and there were thunders and voices and lightnings, and a great earthquake….

And I beheld, and heard the voice of one eagle flying through the midst of heaven, saying with a loud voice: Woe, woe, woe to the inhabitants of the earth...

Posted by thetimman at 1:15 PM

Email ThisBlogThis!Share to TwitterShare to FacebookShare to Pinterest
Labels: culture of death, how long O Lord?