In Case Any Modern-Day Stalinists Read This Blog 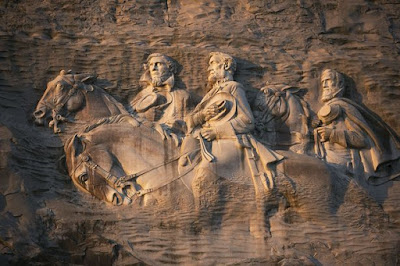 Robert E. Lee was better than you. Yes. He was.
Posted by thetimman at 1:26 PM

For some reason, the photo isn't displaying but I can tell that it's of Stone Mountain. I feel so sad for our children. Their world is filling with lies.

What lies? Robert E Lee used his considerable skills to lead the army of the side that wanted to retain the right to enslave their fellow human beings. No lie. FACT. Don't try to push the states'rights line. That's the way slave owners conned their fellow southerners to die in an immoral cause.

Ive read about the man who started Stone Mtn. He is now famous for Mt Rushmore--Borglum, a progressive opportunist difficult to work with.st in my assessment. Walker Hancock born in StL finished Stone Mtn and was a Monuments Man in WW2. He has several works at StL Zoo and around town. He did president sculptures as well and has works around the US.

I thought I was watching the Taliban or communists--oh I was.

Wow! I think Charlie Brennan is actually exposing antifa and their violence on KMOX! As I type. In detail about Charlottesville and in general. Good on him!

I really thought there would be some reaction to my post. Apparently, I'm one of very few people that look at your blog, and I don't agree with 99% of your ideas. I just like to keep up with the opposition.

@Mary: As a Jesuit (evolutionary) history major at SLU, I would point out to you the evolutionary nature of history. When they did research on the findings in Pompeii, it was noted that there were many free men who had been former slaves. In Roman society, slavery was not an evil thing.---As someone who was stationed for four years at the Naval Base in Charleston, I saw first hand the results of slavery. Downtown near the battery which opened fire on Ft. Sumter, the property was worth one million dollars. As you went outward from the center, you ran into burnt out areas even in the 70s which were worth about a nickel.---There is an area called North Charleston which is a lot like Ferguson. The point is that you have to study history in that day and time and not treat it as revisionist history based on our own modern parameters. I believe that for his day and time, Robert E. Lee was a great man who believed in honor, courage, and community.---Modern American society has none of these attributes. It is based on decadence and strife. So, just whose face should go up on Stone Mountain to replace Lee? Many on the left want Michael Brown. There are parallels to giving them Barabbas.

JBQ I am a student of history as well, and I disagree with your view. People were well aware of the evils of slavery well before our Civil War. They conveniently ignored this fact for economic gain. Robert E Lee made a poor choice. Also, I feel very sorry for you. Just like tim man you sound like a person who is lost in his or her own time. That's unfortunate. You only get to go around once in this life. I feel that there is a lot of good in this time, and the people living in this time.Mary

Mary got the attention she desired!!!! Woo hoo!

i thought that progressives/liberals didn't like black and white thinking--eg, abortion is always murder, marriage is for life, a man is a man...and so on. These are absolutes that some progressive Catholics can't accept as realistic.

Peggy, I don't think Mary is doing it for attention, or at least, not with that conscious intention. I'll give her credit for her positions. She is making the argument of the time, not based on a common understanding of history or public morals, and applying a modern lens of judgement-- heavy on slogans and light on reasons-- to an historical figure of another era.

To rightly understand the many good reasons the Southern states wanted their independence (and slavery is not one of the good reasons) requires an open-minded look at a tumultuous history of a country that was founded enshrining the slavery of human beings in its constitution, and a proper look at the rule of law.

People conveniently forget that the War for Southern Independence was fought among states ALL of whom voted for, or voted to join, a nation whose constitution allowed slavery. And which constitution in no way prohibited the joiners from seceding from this union.

Lincoln supported the Corwin Amendment in March 1861-- immediately prior to the war-- which would have amended the Constitution to forever prevent any attempt to limit or eliminate slavery in the Southern states. He also stated publicly that if he could "save" the union without freeing a single slave he would do that. And his conduct of the war showed his contempt for constitutional law-- fulfilling the worst fears of southern states who thought he would do just that. And so on...

Every state in the Western hemisphere outlawed slavery in the nineteenth century without any violence-- with two exceptions: the US and Haiti. Haiti's revolution was merely mass slaughter and it has never recovered. Lincoln was content to send a mere 600,000 soldiers to their deaths and destroy the fabric of life in the South. If the federal government had paid every slave owner off the full value of their slaves and then some, it would have cost the federal treasury far less even in monetary terms than the war.

And this war ruined the country as it was founded to be, yet it made the imperial power we are today. Power, not law, is the law today.