Jesus Christ Is the One and Only Incarnate Word of God 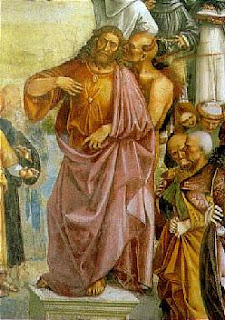 Yesterday I tweeted, "Jesus Christ is the One and Only Savior of the World." I wasn't sure what motivated me to do so then, but today I figured it out when  I read this terrific post by Roberto De Mattei at Rorate Caeli on the worldwide impact of the filial correction. Within it was this frightening gem of a quote:

The Archbishop of Chieti, Bruno Forte, previously special secretary to the Bishops’ Synod on the Family, declared that the Correctio represents “a prejudicially closed stance towards the spirit of the Second Vatican Council which Pope Francis is incarnating so profoundly” (Avvenire, September 26th, 2015).

Pope Francis is "incarnating"  the spirit of the Second Vatican Council? A very dangerous turn of phrase by the repulsive Archbishop Forte, but may very well be exactly what he believes.

De Mattei addresses this thought later in the post:

Now then, we have come to the point of defining Pope Francis a “living God”, forgetting that the Church is founded on Jesus Christ, for Whom the Pope is representative on earth, not the divine owner.  As Antonio Socci correctly wrote, the Pope is not  a “second Jesus” (Libero, September 24th 2017) but the 266th successor to Peter. His mandate is not that of changing or “improving” the words of Our Lord, but of guarding and transmitting them in the most faithful manner. If this doesn’t happen, Catholics have the duty to reprove him in a filial way, following the example of St. Paul in regard to the Prince of the Apostles, Peter. (Gal. II, 11).

I will repeat the title of this post: Jesus Christ Is the One and Only Incarnate Word of God.

Our Lady of Fatima, deliver us!
Posted by thetimman at 8:55 AM

"following the example of St. Paul"

When we try to do this they yell at us "Who do you think you are, an Apostle, God?"

and in the words of Woody Allen ... "Well, I have to model myself after SOMEbody."

Our Lady of Fatima, indeed, deliver us!